Budva, Montenegro, March 5, 2012. The “Mediteranski Sportski Centar” in Budva played host this past weekend to the final stage of Montenegro’s national cup with the local heroes of Budvanska Rivijera BUDVA eventually taking a third consecutive title after edging their archrivals of Buducnost PODGORICA 3:1 (25-13, 23-25, 25-12, 25-20). 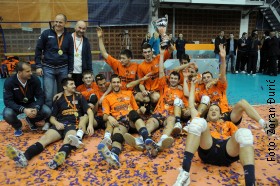 These two teams have played all finals of this competition since Montenegro’s independence, with Buducnost having claimed the trophy twice. Right before the start of the final, Simo Dabovic, the setter of the home team, received the award for “Montenegro’s 2011 Player of the Year”.
On Saturday Luka BAR seized the women’s trophy for the second straight season after downing Buducnost in straight sets (25-13, 25-11, and 25-18). This is the third title for Luka BAR in the past 6 years with middle blocker Marija Milovic receiving the honor for the “Female Player of the Year 2011”.