Friedrichshafen, Germany, March 5, 2012. They had to wait quite a long time for this moment. Now, after spending the past three years watching the celebrations of other teams, VfB FRIEDRICHSHAFEN took the German Cup back home to the Lake of Constance. It is the eleventh victory for the most successful German club in the history of this competition. 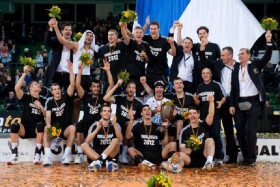 In front of an impressive audience of 10’200 spectators in Halle/Westfalen the team around captain Joao José beat Generali UNTERHACHING in straight sets (25-23, 25-20, 25-20). “I am happy for the guys. They deserved to win”, said FRIEDRICHSHAFEN coach Stelian Moculescu and added: “In November some experts were laughing about us and thought: that is a team which you can beat easily. But this remark was very stimulating and challenging for us”.

The match which was expected to turn into a real fight became a pure show of strength for VfB. Especially in the second and third set FRIEDRICHSHAFEN did not leave any chance to its ambitious opponent. “HACHING started well”, stated Moculescu. “But we know to stay patient”.
Furthermore the German Cup winner had the most valuable player of the match on his side. Setter Juraj Zatko played an excellent game and received many compliments from his coach. “He was just outstanding”, said Moculescu. “I am proud of him”.
FRIEDRICHSHAFEN was accompanied to Halle by almost 200 fans that had traveled 650 km to Westfalen and back home to the south of Germany. At the “Gerry-Weber-Stadion” the blue corner created the atmosphere of a home match. “The fans were amazing”, said Zatko. “Their support was just fantastic”. Also spiker Milos Vemic was quite impressed: “For this atmosphere I do not have any words. It was just unbelievable”.