Tirana, Albania, March 19, 2012. The regular season of Albania men’s national league was recently completed with the first and second ranked teams, Studenti and Teuta, qualified for the semifinals, while four more sides will be embarking on a quest for the two remaining spots via the quarterfinals starring Tirana vs. Elbasani and Vllaznia against Skenderbeu. 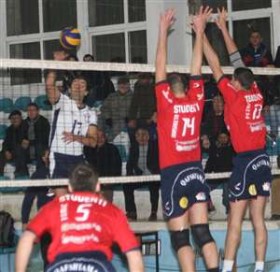 Studenti TIRANA finished atop of the charts after collecting 50 points out of 20 matches, 2 more than the closest rival, Teuta DURRES.

These teams exchanged the top positions quite a few times in the past weeks, with the 3:1 victory claimed by Studenti in Durres paving the way for the first place to the players from Albania’s capital city.

Studenti completed its campaign by downing the team of Skenderbeu in straight sets in a match that was postponed after the calendar was heavily disrupted in February because of the bad weather conditions registered in Albania.

Tirana claimed the third place of the standings with 39 points ahead of Vllaznia, Skenderbeu and Elbasani.

The quarterfinals are starting tomorrow and will be played with the formula “best of three”.

As for the women’s national league, there is one more round left for completion of the regular season and the championship will then continue with the same format used for the men’s division.

At the moment the charts are topped by Tirana, followed by Teuta and Minatori.