Warszawa, Poland, March 19, 2012. The crew of Politechnika WARSZAWSKA is more than happy after having qualified this past Saturday for the final act of the 2012 CEV Volleyball Challenge Cup which will actually be an all Polish affair against Tytan AZS CZESTOCHOWA. 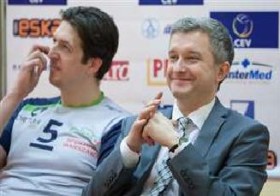 Politechnika is evidently happy with final spot in Challenge Cup

“I am really proud of my players” says head coach Radoslaw Panas (pictured). “This is our first season in the European Cups and we have immediately advanced to the last stage of the competition, so this is just great. I think we have good chances to take the trophy. The second match with Tomis was not easy at all: after losing in Romania, they fought bravely also here in Warsaw” he continues.

“Politechnika well deserves this spot for the final as they played a couple of great semifinals. I am still happy with the performance of my players as even after our starting setter got injured, they did fight bravely until the end” stresses the mentor of Tomis CONSTANTA, Jorge Cannestracci.

“After winning in Romania everyone felt like we were certainly going to make it to the final and so it was not easy to stand the pressure” singles out Polish captain Marcin Nowak.

“This was our dream and we finally fulfilled it. This second semifinal was not played at a very high level but still we got the result that we were looking for and we will fight until the end because now we want to win the trophy even though this is already a tremendous success for our club”.