Prague, Czech Republic, March 19, 2012. Stewart Bernard was recently appointed head coach of the Czech men’s national team for the next two years. After a process that did take some weeks, his name was finally announced via a press conference that was held today in Prague. 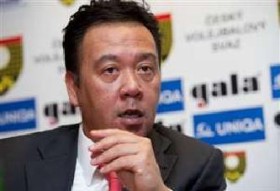 Stewart Bernard to mentor Czech national team for next 2 years

Bernard was at the helm for many years – from 1986 to 1997 – of the Dutch junior national team and in 1998 started working with the seniors as he was nominated head coach of Tunisia.

Since 2003 he was at the helm of Germany’s youth national team while he also assisted Stelian Moculescu with the seniors, thereby joining the 2008 Olympics in Beijing where Germany got back to the Olympic arena after a very long break.

After Germany’s national team really disappointed at the final round of the 2011 CEV Volleyball European Championship whose prelims were played in Prague, the German Volleyball Federation (DVV) decided to dismiss head coach Raul Lozano and hence Bernard mentored the group at the Olympic pre-qualification tournament in Tourcoing, and thereby booking a ticket to Sofia, venue of the last qualifying stage in Europe scheduled for this coming May 8-13.

“I am very grateful to the Czech Volleyball Federation for this assignment. Our primary goal will be to qualify for the final round of the 2013 European Championship taking place in Denmark and Poland” says Bernard.

“We have very talented players, so there is a chance to build a solid team”.

“I know Stewart personally and he is a very experienced coach” adds the President of the Czech Volleyball Federation, Zdenek Hanik. “I hope he will be contributing the bright future that we all wish to our men’s national team”.

Bernard will be assisted by Zdenek Smejkal, the head coach of the Volleyball club based in Ostrava, while his main scoutman will be Peter Sezemsky.