As they want to leave behind the major disappointment from last Saturday where they lost the Finnish Cup finals to LP KANGASALA, the players of LP SALO will be trying to get back on track Thursday as they play one of the best teams in the world, Turkey’s Fenerbahce SK ISTANBUL, in the 1/4 finals of the 2014 CEV Volleyball Cup – Women. 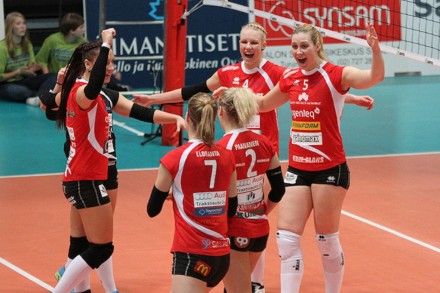 The “Yellow Angels”, as the players of Fenerbahce are dubbed by their fans, will travel to Finland and provide the local audience with an opportunity to follow the actions of some real Volleyball superstars, such as Korean Kim Yeon-Koung – MVP of the 2012 Olympics in London where she settled for fourth place with her national team – or 2012 Olympic champion Fernanda Garay of Brazil. Another player to watch out for will be US American Alisha Glass, a silver medallist from the 2011 FIVB World Cup in Japan.

Last year LP SALO wrote history for Finnish Volleyball by turning into the first team from this country to make the semis of the European Cups before they lost there to Russia’s Dinamo KRASNODAR that went on to win the 2013 CEV Volleyball Challenge Cup. This time they are hoping to play their best so as to stand a chance even against the star-studded team from Turkey. “Our win-loss home record in the European Cups stands at 13-4 and this shows that everything is possible. Of course we know that our opponents are fully aware of this. This is a great challenge for us and our players. On the other hand, it feels great to welcome such world-class Volleyball players to our city” says LP SALO Sports Director Tomi Lemminkäinen.

LP SALO is the current leader of the Finnish national league with 42 points after 15 matches, with their record standing at 14 wins and one defeat so far. The match with Fenerbahce SK ISTANBUL will take place on Thursday, January 16, at the local Salohalli.