Poland’s champions Atom Trefl SOPOT feel well ready to play Turkey’s Eczacibasi VitrA ISTANBUL in the Playoffs 12 of the 2014 CEV DenizBank Volleyball Champions League – Women. SOPOT just beat in straight sets their last opponent in the national league and are fully focused on the Turkish giant that is set to visit Gdansk on Wednesday. 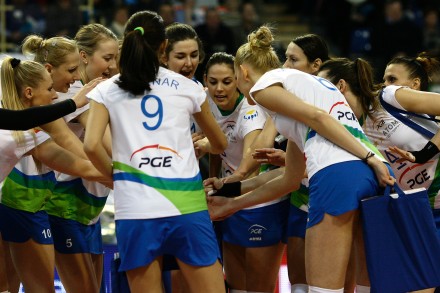 “We played really strong pressuring Impel WROCLAW with our serve and this way we could claim an easy victory last night” Atom Trefl head coach Teun Buijs says. “The last couple of matches we played in the national league were a good way to test where we stand before we take on Eczacibasi. I hope we will step it up and play even better than we did lately.”

“Our opponent is really strong but we have improved as a team, so everything is possible” says Charlotte Leys who one week ago wrote history with her national team as Belgium’s “Yellow Tigers” qualified for the World Championship for the first time in 34 years. “If we play our best, we can stand a chance with any opponent” she continues. “We are the underdogs going into this double-header, but we promise that we will fight for every single rally and maybe with the support of our fans we can cause a sensation come Wednesday night.”

Atom Trefl SOPOT is currently ranked second in the Polish national league, three points behind leaders Chemik POLICE. Eczacibasi, on the other hand, is in fourth place in the very competitive Turkish national league, ex-aequo with Galatasaray Daikin. However, the team around Italian-born head coach Lorenzo Micelli just suffered a setback losing this weekend to Besiktas ISTANBUL, the team that currently sits in sixth place.

President of PZPS – “If Wilfredo shows...