The Israeli Volleyball Association just celebrated one of the major highlights of the current season with the finals of the men’s and women’s national cup held at the Metrowest sports hall in the city of Ra’anana. 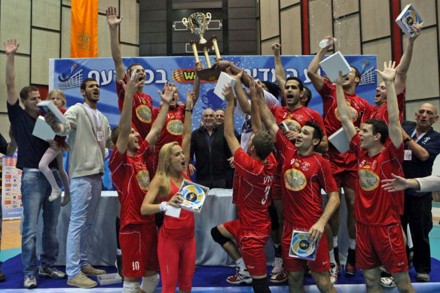 Some 1,500 fans were in attendance for the men’s final featuring the likes of Maccabi TEL AVIV and Hapoel MATE-ASHER AKKO with the latter eventually claiming their second consecutive title in the competition after a dramatic five-setter. With this, Maccabi and Hapoel share the same number of victories – 7 apiece – since the inception of the national cup.

The women’s final was not less exciting and dramatic with 1,300 supporters joined by Israel’s Minister of Culture and Sport, Mrs. Limor Livnat, who addressed the audience before the start of the game by recalling the enormous progress made by women’s sports in the country.

The final match featured the likes of Hapoel KFAR SABA and Maccabi HAIFA-NEVE SHA’ANAN. Maccabi started out strong claiming the opening set at 30-28 but their opponents of Hapoel fought back by sweeping the following three to claim their first national cup title in history.