IRE: Volleyball boys in green to fly the flag in Europe

Ireland’s junior men national team will jet off to Scotland next week to take part in the CEV Volleyball European Championship – Small Countries Division for the first time. 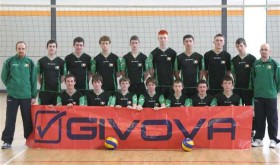 Volleyball boys in green to fly the flag in Europe

Head coach Laurent Cauet – who is responsible also for the senior national team – assesses the week ahead: “We have a challenging week ahead of us. We play the opening match of the tournament against the pre-favorites from Cyprus. It is a very hard match, but our players will give a great account of themselves”.

Day two will see the Irish guys take on their Northern Ireland counterparts. They have played each other several times over the past two years, and like previous encounters, this match will be very close. Luxembourg will be next followed by hosts Scotland, who will be hoping to use their home advantage.

The final match in the series will see Ireland play San Marino. “This will be a though game for two reasons” explains head coach Cauet. “First of all, San Marino is a strong team. Most of their guys play in the Italian national league. Secondly, it will be at the end of a tough week. Fitness and stamina will help decide this match”.

Summing up Ireland’s chances, Cauet concludes: “It will be a demanding week for us. We will face five strong teams and will also have full training sessions each day as well. The week will be very intense. I do believe that the lads will give a great account of themselves. They are versatile and they show no fear. They fight for every ball and they fight for each other”.