That moment everyone has been hardly waiting for is finally there as on Saturday Tytan AZS CZESTOCHOWA will play the return game for the final of the 2012 CEV Volleyball Challenge Cup against their compatriots of Politechnika WARSZAWSKA. 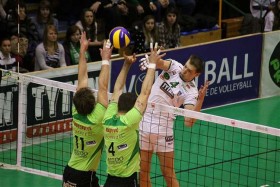 This is the very first time in history that the last and deciding act of a European Cup has turned into a Polish affair and after scoring an away win this past Tuesday in Poland’s capital city Tytan AZS CZESTOCHOWA looks quite confidently to the second game where the group will be able to profit of the home advantage.

The trophy that will be at stake on Saturday was already unveiled to the fans and the media a couple of days ago. “Every Volleyball fan shall come to the sports hall to attend a great Volleyball show” says club President Konrad Pakosz. “The first match in Warsaw was not easy at all and I expect another tough game as European glory and hence a piece of history will be at stake on Saturday here in Czestochowa. We have foreseen special contests, shows, gifts and even fireworks to attract as many fans as possible so that they will remember that day for a long time” he adds.

Ad-hoc contests associated to the final are being promoted by the press as well as by local radio stations while the players of Tytan AZS CZESTOCHOWA, after winning the first match in Warsaw, did not relax at all as they know Politechnika will be highly motivated and hence the game may quickly turn into an uphill climb for the hosts.

The final is scheduled for Saturday at 2:30 pm local time and will be broadcast live by two Polish TVs, while live streaming will be provided by CEV partner LAOLA1.tv

IRE: Volleyball boys in green to fly the flag in Europe