Sollys / Nestlé (SP), the winner of the first match of the series best-of-three in semifinals of the Super league 11/12, aims to end the playoff in its favor. At home and with the support of the fans, Usiminas / Minas Gerais (MG) intends to prolong the series. 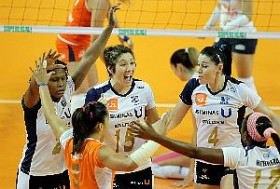 The coach of Usiminas / Minas, Jarbas Smith, considers that playing in front of the home crowd is of great importance for the team.

“We only had two losses at home this season and we have the support of our fans. This has been a positive factor throughout the competition.”

The coach of Usiminas / Minas also highlights a point that the team needed to reach the goal. “We need the victory, but we know the difficulties and the qualities of the opponent.”

The coach of Sollys / Nestle, Luizomar de Moura, believes that victory in the first confrontation is not a big advantage.

“We studied a lot the playing of Usminas / Minas and we are focused on this second match. The fact that we won the first game should not be taken as an advantage. We know that for the opponent, it is all or nothing and we should think the same.”

In the other playoff of semifinals Unilever (RJ) will face Volei Futuro (SP). In the first match, the better was the team from Rio de Janeiro, which in Araçatuba (SP) won with 3:0.

The second match of the series best-of-three will be this Saturday (03.31), at 10h in the hall Maracanazinho in Rio de Janeiro (RJ).  If Unilever wins, it will qualify to the finals. In the case of victory of Volei Futuro, the third game will be played on April 6.