Switzerland women’s national team will be debuting this May in the CEV Volleyball European League and the participation in this competition is seen as a fundamental step for the development of the group that will be going for some positive results as the country plays host – together with Germany – to next year’s CEV Volleyball European Championship. 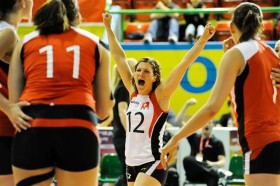 Switzerland – which is currently ranked 108 in the world by the FIVB – will play its home round at “St. Léonard” sports hall in Fribourg, with its opponents in preliminary Pool B being Turkey, France and Bulgaria. The side mentored by Svetlana Ilic has set the goal to qualify for the final four which is scheduled for early July in Karlovy Vary, but this won’t be easy at all given the quality of the other teams assigned to that preliminary Pool.

Fribourg was eventually allotted the organization of this home round this past February and the group around Gilles Seydoux will be working hard to guarantee the right pre-conditions for the Swiss heroines to score some home wins in front of a massive and jubilant crowd. “After the finals of the national cup were moved to Bern and organizing the All Star Game for 4 years, the Volleyball Association from Fribourg was longing for an opportunity to host another top event” says Didier Knopf. “Via the valuable support provided by the local authorities Fribourg will certainly turn into a perfect home for high-class Volleyball” he adds.

The local organizers are full of enthusiasm and have come up with some innovative ideas since the very beginning of the negotiations with Swiss Volley. “We have found in Gilles Seydoux and his group a strong partner to host this home round, which is pretty demanding as this is not that far away from the conditions that are required for a home phase of the European Championship” stresses Reto Hähnlein of Swiss Volley.