The third game is decisive. Cimed / SKY (SC) and Vivo / Minas Gerais (MG) will play this Friday (3.30) at 21h, in the last match of the series best-of-three and decide which team will qualify for the semifinals of the Super league 11/12. 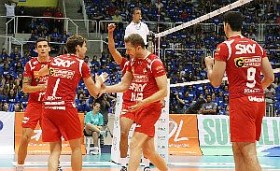 Cimed / SKY opened the series with a victory with 3:2 at home. In the second game, Vivo /Minas won with the same score. Cimed / Sky is placed fourth and will have the chance to improve its position by playing the game at home, while the team of Minas is ranked fifth.

The setter of Cimed / Sky, Gustavo, commented on the following match: “It is clear that playing at home and the support of the fans helps. However, who will win in this decisive match depends on the strength of the team. We are training and preparing for the game of five sets. Two teams will play in this final duel with seriousness and dedication. We need to fix what was wrong and we already improved our block.

The setter of Vivo / Minas, Marcelinho, also pointed out that the game this Friday will be very important. “It is decisive for both teams. We want this place in the semifinal and we must win. We will play on the court of a great team, so we need to focus and be calm. We cannot make errors and give points for free, we have to serve well.”

The setter also praised the opponent: “Cimed / SKY is a great team with the best defense in Super League and is very strong in attack. However, we played excellently in the last game and we need to play the same way now.”

RJX (RJ) and Volei Futuro (SP) have already guaranteed the place in the semifinals. Sada Cruzeiro (MG) and BMG / Sao Bernardo (SP) will play next Saturday (3.31) at 12h in Riacho, in Contagem (MG).

As for Cimed / SKY and Vivo / Minas, this series is even. In the first game, at home, Sada Cruzeiro won with 3:0 and in the second BMG / Sao Bernard won with 3:1.

THE THIRD ROUND OF THE QUARTERFINALS