Mexico finished strong in defeating Costa Rica 25-16, 25-18, 25-20 on the opening day of the NORCECA Men’s Continental Olympic Qualification Tournament on Monday at the Walter Pyramid in Long Beach, Calif. The winner of the eight-team tournament earns a spot in the 2012 Olympic Games volleyball competition. 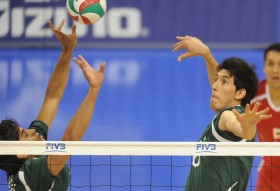 Mexico scored 17 aces and held a 35-16 successful attack advantage in the three-set victory. Costa Rica committed 33 errors in the match to Mexico’s 18. Mexico challenges Trinidad & Tobago at 3 p.m. Pacific Time on the second day of Pool A action, while Costa Rica takes on host USA on Tuesday at 8 p.m. Pacific Time.

Mexico Acting Captain Carlos Guerra: “Congratulations to Costa Rica on a great match,” Mexico court captain Carlos Guerra said. “I think we did well considering (Gerardo) Contreras was not on the floor (due to illness). We just found out about that this morning. It was our first match we just had to stay patient and get confident and not look ahead to Wednesday. We just need to play our game.”

“It is a high-level tournament,” Costa Rica Coach Cesar Salas said. “I know Mexico’s style. I think what affected us is we have never played at this high level of tournament. The first match is the hardest. We need to continue to perform better. We had problems with Mexico’s serve.