Eight NORCECA countries will compete for one spot at the 2012 London Olympic Games during the NORCECA Men’s Continental Olympic Qualification Tournament being held May 7-12 at the Walter Pyramid in Long Beach, Calif. 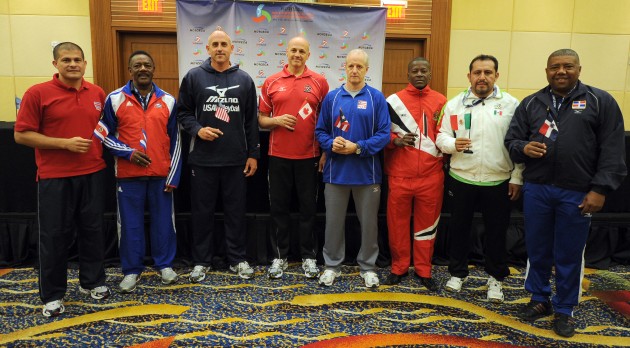 The tournament starts with the preliminary round-robin pool play round with Costa Rica, Mexico, Trinidad & Tobago and United States grouped in Pool A. Canada, Cuba, Dominican Republic and Puerto Rico are grouped into Pool B. The quarterfinal round takes place on May 10, followed by semifinals and classification matches for places 5-8 scheduled for May 11. The medal-round and final classification matches will be played May 12.

Cuba and United States are the heavy favorites in the field as the No. 5 and No. 6 ranked teams in the FIVB world ranking. However, neither team is taking anything for granted in this crucial event.

Coaches of the eight teams expressed their feelings and goals prior to the start of the competition being held May 7-12 at the Walter Pyramid in Long Beach, California.

“NORCECA is always a strong tournament and we have to do our best to qualify for the Olympics,” Cuba Coach Orlando Samuels said. “We are well prepared for this event as we played matches versus Argentina a few weeks ago. The stages of preparations are complete and we are ready.”

“We are excited about what we have done in a short time after our players returned from their club teams,” United States Coach Alan Knipe said. “We had the opportunity to bring in Argentina for a couple exhibition matches and our Red-Blue scrimmage this past Friday. These matches provided us some things to shoot for and evaluation. We are excited to get started.”

Knipe mentioned the tournament is wide open based on recent match results at the 2011 NORCECA Men’s Continental Championship held in Puerto Rico.

“At the last NORCECA Continental Championship, there were a lot of close matches – many going five sets and we split with Cuba,” Knipe said. “As for the tournament field, we have tremendous respect for every team and will give each team our full attention for that match.”

Cuba defeated the USA in a five-set thriller in the 2011 NORCECA Men’s Continental Championship gold-medal match after the USA won the pool match in four sets. At the 2011 FIVB World Cup in Japan, USA won an exciting five-set match over Cuba in Tokyo.

If Cuba and United States do not claim the gold medal, one last chance exists to qualify for the Olympic Games through the world qualification process in early June. The NORCECA event represents the final opportunity to advance to the London Olympic Games for five of the other six teams should either Cuba or USA wins the continental qualifier.

“This is it,” Canada Coach Glenn Hoag said. “Our team has matured nicely. It is a young group with only a couple veterans. Our aim is to grow as a team and going to the Olympics would be great. We are taking this tournament one day at a time, one play at a time.”

Puerto Rico, which typically has fielded a strong team in NORCECA and FIVB events in the current Olympic quadrennial, has faced some adversity in its preparation for this tournament. “We have worked with a young group of players who did not compete in Europe since January, and we integrated the training with the remaining four players who did play in Europe over the last 10 days,” Puerto Rico coach Carlos Cardona said. “The team is having some situations. We were not able to have any friendly matches. Our best player, Hector Soto, has not recovered 100 percent from an injury, so our decision was to not bring him. How we finish in this tournament will depend on how his replacement, Ezequiel Cruz, and the 4 or 5 other young players compete. I don’t want to choose a favorite to win the tournament, but the strongest teams are USA, Cuba and Canada.”

Mexico has a specific goal for the tournament, but also a dream. “Our dream, and it is a dream, is to qualify for the Olympic Games,” Mexico Coach Jorge Miguel Azair said. “However, to play in the semifinals by finishing second in our pool is our goal. We know our team is not at the same level of Cuba and USA. Since the Pan American Games, we have not had any scrimmages and just returned back into the gym three weeks ago with basically the same team. We have played together for so long, we should be okay.”

Prior to the tournament, Dominican Republic expressed it is not backing down from the challenge to qualify for the Olympics. “The Dominican Republic is bringing its best players – we are here to compete,” Dominican Republic Coach Jacinto Campechano said. “In each match we will be fighting to the death. We are in the strongest pool with Cuba, Canada and Puerto Rico. It may seem like David versus Goliath matches, but we don’t think that way. We would like to reach the top four places, and after that we will see how it happens day-by-day.”

The coaches of Costa Rica and Trinidad & Tobago view the tournament as opportunities to grow as a team and with their own goals against a strong field.

“Technically, we have been practicing for three months,” Costa Rica Coach Cesar Salas said. “Our goal is to give our best efforts versus Mexico and Trinidad & Tobago, while giving a good match against the USA. Our mission is to finish second or third in Group A. Going into the tournament, I believe the USA is the favorite.”

“I know this tournament will be tough and competitive every day,” Trinidad & Tobago Coach Gideon Dickson said. “We would like to produce some surprises in this tournament. We are happy to represent our country and the Caribbean region at this tournament.”