The United States overwhelmed Costa Rica 25-14, 25-9, 25-9 to improve to 2-0 in Pool A of the NORCECA Men’s Continental Olympic Qualification Tournament being held through May 12 at the Walter Pyramid in Long Beach, Calif. Costa Rica falls to 0-2 in the tournament. 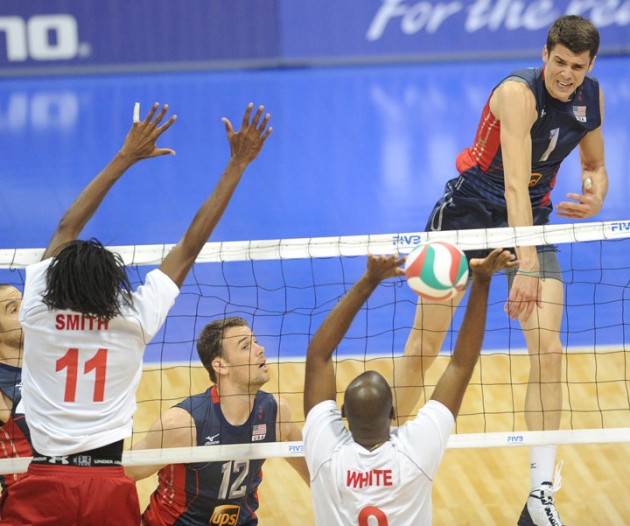 The USA held scoring advantages of 38-18 in attacks, 11-0 in aces and 8-2 in blocks. USA concludes Pool A on Wednesday against Mexico (2-0) at 20:00 in a battle of undefeated teams. The winner will advance directly to the semifinal round on Friday, while the loser will fall into the quarterfinal round on Thursday.

Costa Rica will seek its first win against Trinidad & Tobago (0-2) at 15:00. Both teams need a victory to remain alive for the gold medal and chance at the Olympic Games.

“As far as tonight, I thought our team controlled the game behind the service line had a pretty nice control block giving them pressure and having it hard to side out.” USA captain Clay Stanley said. “As far as tomorrow, we want to keep doing what we have been doing and keep our serves in, keep improving and get ready for the next few matches coming up.”

“Our goal tonight was to have better reception of the ball and improve our defense and there isn’t a better team to do that against than the United States,” Costa Rica Coach Cesar Salas said. “I am pretty happy about tonight. These kinds of tournaments are very helpful for us. In Central America the challenge isn’t so high so every point, set and match is very important to us.”