With the Technical Meeting taking place late Monday evening, everything is now ready for the 2012 Olympic Games - European Qualification for men to get under way in Bulgaria. ”Eight very good teams landed in Sofia, so I expect a tough competition and unforeseeable results,” Royal Belgian Volleyball Federation President Philip Berben, serving as Jury President of the tournament in Sofia, stated. “CEV has never doubted Bulgaria's capability to handle the organization of such an event. After all, that is why we chose the country to host the European Qualification for the Olympics.” 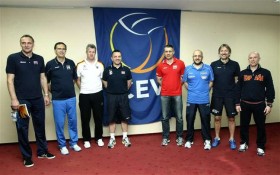 The home team Bulgaria and neighbors from Serbia are the big favorites to make it to the semifinals from Pool I, where they are also joined by the teams of Slovenia and Spain.

“Slovenia already made its big step when we qualified for this tournament,” head coach Veselin Vukovic says.

”We will be playing without our two best players and I prefer to stay realistic about our chances.  Bulgaria and Italy have some planetary players in their rosters who will make the difference on the court.  Serbia has its chances too, although it will be tough for them without their captain Ivan Miljkovic”.

”It is an honor just to be here in Bulgaria,” Fernando Munoz Benitez, head coach of Spain, adds. ”The team is young and we need this kind of experience to develop our game. We were very happy to gain the right to compete for a place in the Olympics and we will try to win every game here. Three teams – Bulgaria, Italy and Serbia, are expected to be physically, tactically and mentally ahead of the others, but we hope to surprise them.”

”This tournament is very important to us, beacause it is an opportunity to make it to the Olympic Games,” the mentor of Serbia Igor Kolakovic explains. ”I hope we will play the same way we did at the European Championship as we want to go to London.” His Bulgarian counterpart Radostin Stoytchev contemplates: “Currently the biggest rival of Bulgaria is… Bulgaria. We have to turn our back to the emotions and pursue good results just as professionals do. I wish we had more time for preparation, but in the end of the day the conditions are the same for everyone. The team must find the right way psychologically and, only then, will we think about every single opponent“.

With Italy being the heavy favorite to win Pool II, an upset from any of the other three teams – Germany, Slovakia and Finland, is certainly a possibility. According to Germany’s head coach Vital Heynen, his team has a difficult task in the group.  “It is my first week with the team, but we are aiming to get a positive result in our first match. In my opinion, Bulgaria is the big, big favorite here,” he states. “We arrived in Sofia in a very good mood. Slovakia will meet great teams here, but our minimum goal remains to make it to the semi-finals. Only one match will decide the champion, so, besides Serbia and Bulgaria, every other team has its own chances. We hope to be the surprise here. Spain has a great team too that can play very fast and intelligent volleyball.” These are the words of Slovakia’s head coach Stefan Chrtiansky.

“This tournament is very important for Finland,” Finland’s mentor Daniel Castellani stresses. ”We waited four years for the chance to play in the Olympics and we will give our best.  Of course, the team is not perfectly prepared, but our motivation is great. The main goal is to qualify for the final round. After that everything is possible.”

Italy’s head coach Mauro Berruto adds: “We feel perfectly here in Bulgaria. We gathered the team in practically the last minute, so we cannot talk about real preparation. Our goal is to keep the players healthy and try to compete on an optimal level. We do not have injury problems and feel ready for the tournament. We are expecting the big game on Sunday, but first of all we will have to work hard to win our tough group”.