The magnificent Arena Armeec in Sofia is ready to make its official volleyball debut as the 2012 Olympic Games - European Qualification for men gets under way in the Bulgarian capital today. 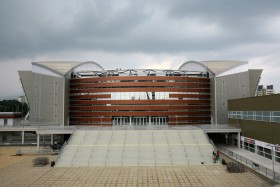 With its grand opening held some nine months ago with an exhibition match between the men’s national teams of Bulgaria and Serbia, the 12’470-seater has hosted several volleyball friendlies so far, but will see its first official volleyball competition run from today through Sunday as eight of the strongest men’s national teams in Europe will battle for a single ticket to make it to the Games in London.

Well over 35’000 tickets have already been sold as the tournament has been in the center of the Bulgarian sports public’s attention for months. With the almost iconic status that the Lions, as the men’s national team of Bulgaria is usually referred to, have in their country, the local fans are eager to cheer them on their way to London.

About 40 young and devoted friends of the sport have joined the organization of the tournament as volunteers and will do their best to secure the smooth and successful running of the competition. In addition, the so-called Arena Armeec Angels will be among the spectators to ensure their comfort as this grand volleyball show proceeds on the playing court.

Those fans around the world who do not have the chance to attend the competition at Arena Armeec in person should not feel left out as over 200 representatives of the media from many different countries have been accredited to attend this qualification tournament and will provide worldwide coverage of the event.