The NORCECA U21 Men’s Continental Championship features the best teams of the region full of players battling in a great show in their quest for two places available to the 2015 FIVB World Championship. 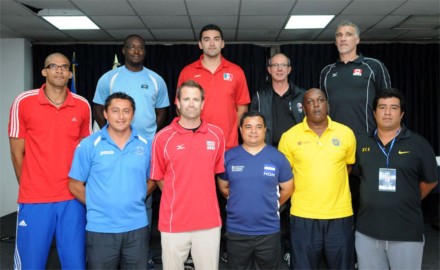 The coaches of the ten teams taking part in the tournament agree that the competition will be a tough one, with good players who have the experience of World Championship and Pan American tournaments.

Teams are divided into three pools. El Salvador, Honduras and Barbados are in Pool A, Puerto Rico, Canada and Santa Lucia are in Pool B and the Pool C consists of USA, Mexico, Cuba and Nicaragua.

John Barrett, Coach of Canada: “We hope to fight hard to be in the final match. We want to be in the World Championship next year, that’s our goal. We know the other teams are complicated and won’t be easy for us, we will give all in the court.”

Victor Porras, Coach of Mexico: “We want to do a good job. We are hosts of the World Championship next year and we can’t play slow. This tournament is good for the players to get their feet wet. We have new players and we need give them experience to get there prepared.”

Osman Hernández, Coach of Nicaragua: “Our pool is very difficult. We have the champions and the third place of the NORCECA U19 Championship. We hope the boys get the experience. This is our first NORCECA U21 and we hope they learn for good results in the future.”

Rony Martínez, Coach of Honduras: “We want to reach the final stages. The pool looks easy in theory, but if El Salvador asked to host is because they have a well prepared team. The Caribbean islands have grown, they are prepared, and we expect a good match with Barbados”.

Elvin Germain, Coach of St. Lucia: “This is the second tournament of NORCECA for us. We were in Canada in 2010. We are very excited and we want play as soon as possible. Our younger players want to play against other players of higher level for them to get there in the future.”

Daniel Friend, Coach of United States: “We would like to play at the highest level. Hopefully we can do that and qualify to the World Championship. This pool is difficult.  Cuba, Mexico and Nicaragua are very competitive and I think a good team will be left out.”

Pavel Pimienta, Coach of Cuba: “We have a principal goal and that is to qualify to the World Championship. The pool is very strong, so we must play very good to attain one of the top places in the pool trying to avoid the quarterfinals and go direct to the semifinal round.”

Juan Aviles, Coach of Puerto Rico: “We took this job with young teams on December 2013. We called a massive group of kids and in the process we have had more than 220 kids and here in this category we have the result of that.”

Ricardo Rivera, Coach of El Salvador: “We are excited and motivated because we won this opportunity in the Central American Cup. We want to qualify in our pool and advance to the next round. It will be hard.”

John Stuart, Coach of Barbados: “We have never seen these teams playing so we will wait and see how the pool is and where we are. We have six players with experience in NORCECA U19, in Tulsa, United States. This is our first time in this level and we hope to be among the top four, to continue advancing, improving and learning.”

ITA W: Lipicer is back in the game