The European Volleyball Confederation and Special Olympics have entered into a partnership designed to promote greater opportunities in Volleyball for athletes with intellectual disabilities. 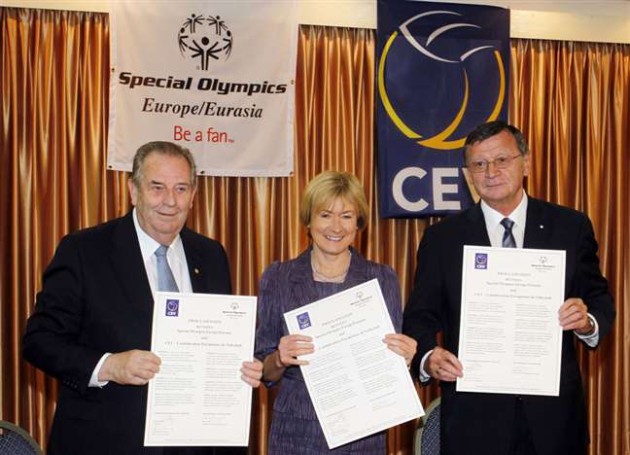 “Volleyball is for everyone and we are committed to playing our part in promoting greater inclusion, respect and acceptance for people with intellectual disabilities in the sport across Europe” said André Meyer, President of the European Volleyball Confederation. “Special Olympics athletes serve as an important reminder to us that volleyball and sport in general provides us with the unique opportunity to go beyond our limits and reveal our true potential.”

The partnership first comes into action at the 2012 CEV Beach Volleyball European Championship Final which is set to take place through May 30-June 3 in Scheveningen, The Hague. On Saturday, June 2nd a total of six Beach Volleyball players, accompanied by two coaches, from Special Olympics The Netherlands and representing the club Twente’05 will play before a large audience of fans and media that are expected to attend the real highlight of this year’s Beach Volleyball calendar.

Ten individuals are taking part in a Fellowship aimed at enhancing coaching skills required to work with athletes with intellectual disabilities to compete in Volleyball and Football. Five Fellows are from the United States, three from Serbia and two from Montenegro. The Fellowship is funded through a grant from the Bureau of Educational and Cultural Affairs of the U.S. Department of State.

ITA A1: The end of the contract between the Vibo Valentia and Nikolov