Korea underlined their supremacy over the 4th AVC Cup for Men after putting it past fighting India in hard-fought three-set thriller 3-0 (25-23 25-21 27-25) in the final showdown at the B.Sholak Sport and Culture Palace on Sunday. 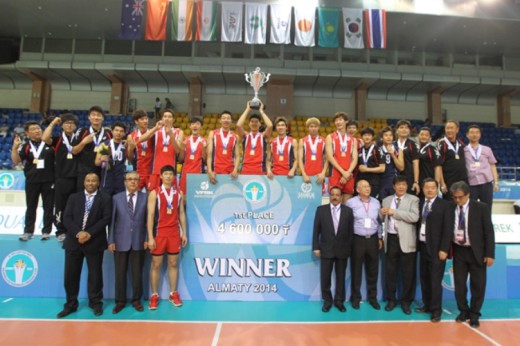 The Korea’s maiden title came in their second final in the biennial top-flight competition. The world No.19 made their debut effort in the inaugural AVC Cup hosted by Nakhon Ratchasima, Thailand in 2008. There, the Koreans advanced to the final clash for the first time, only to go down in grueling five sets to the eventual winners Iran.

Seo Jaeduck scored a match-high 16 points including 14 deadly attack hits for Korea, while Naveen Raja Jacob led India with 15 points, all of which from devastating spikes from 25 attempts.

“I’m very happy for the win. India played their best and we did the same. It’s really great for us to win the AVC Cup for the first time,” said Korea’s head coach Park Kiwon.

To read more about this competition ant to see stats click on Asian Cup M.