Russia come into the tournament off the back of a sensational 2011 which saw them clinch their second World League title as well as a fifth World Cup in Japan. 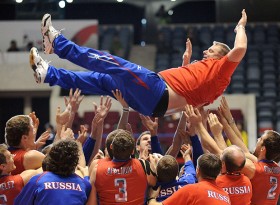 Vladimir Alekno and his team

Having guaranteed their place in London this summer, coach Vladimir Alekno will be hoping to gain momentum by successfully defending their title to become the first Russian team to win back-to-back crowns.

However, they will need to be at their best as they have some dangerous rivals lining up alongside them in Pool A.

Serbia may not have been able to follow up on their bronze medal performance at the 2010 World League and World Championships in 2011 but they did seal the European Championships, proving that on their day, they are serious contenders.

Igor Kolakovic’s team came home eighth at the World Cup, suffering a surprise loss to Iran in the opening round, and will want to bounce back this year.

World No.5 Cuba will also hope to return to winning ways after reaching last year’s final but failing to pick up a win.

They will be joined by Japan who will look to use their underdog status to mount a surprise challenge to the other three heavyweights.