Whilst 2011 was far from a disappointing year for Brazil, the world No.1 will be keen to return to the top step of the podium after missing out on both World League and World Cup gold. 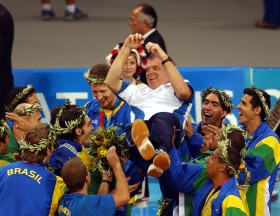 Bernardo Rezende and his team

Bernardo “Bernardinho” Rezende’s side were beaten by rivals Russia in the final of last year’s tournament and narrowly sealed bronze at the World Cup.

Giba and Murilo will miss the first weekend of Pool B action but the return of 2004 Athens Olympic Games gold medallist Ricardo Garcia injects the squad with a wealth of experience.

Poland will want to quickly add another medal to their honours list after picking up bronze during last year’s campaign, their first ever in the World League. The signs of improvement continued after the World League as they wrapped up bronze at the European Championships and then silver at the World Cup. They will be dark horses to take the group ahead of Brazil, although lost to their South American counterparts in five sets at the World Cup.

Canada return to the competition for the first time since 2006 and off the back of a brilliant campaign at the NORCECA Continental Olympic Qualification Tournament where they turned the form book on its head to reach the final, losing to USA.

Finland are back once again and with no chance of reaching the Olympic Games, will hope to remain focused and reach their first ever Finals.