With both the United States and Italy assured of a place at the 2012 Olympic Games after winning their respective Continental Olympic Qualification Tournaments, their focus will be on preparing for London and gaining momentum leading up to the main event. 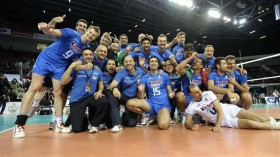 Mauro Berruto and his team

The US have not been at their best in recent years, but their only gold medal in the tournament came in 2008, the same year they gained immortality by winning gold at the Beijing Olympic Games, so they will hope history repeats itself this year.

Italy have seen a drastic improvement since Mauro Berruto was named coach in December 2010.

They narrowly missed out on bronze at last year’s World Cup, with one set the difference between them and Brazil. They will fancy their chances at capturing the pool and an automatic place in the Finals.

France and Korea complete the pool, with both also scheduled to compete in World Olympic Qualification Tournaments during the same period, adding a distraction for both.