Argentina will come into the World League just weeks after successfully qualifying for the London 2012 Olympic Games, with several rising stars building a promising future for the team. 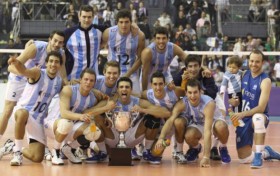 Javier Weber and his team

Javier Weber’s young stalwarts will be hoping to add to their success this year, starting with the World League.

However, they face a sizeable opponent in Germany, who pushed Italy all the way in a sensational CEV Continental Olympic Qualification Tournament final in May, narrowly losing by the narrowest of margins.

Bulgaria are in a state of transition and will be reeling after missing out on Olympic qualification in May. They still have another chance at the World Men’s Olympic Qualification Tournament so will want to use the World League to prepare for that crucial event.

Finally, Portugal return all the more experienced after qualifying for the first time since 2006 last year. They had to hold off China in the Playoffs to keep their place in the tournament and will be hoping to build on last year’s campaign.