Thailand’s coach Kiattipong Radchatagriengkai is confident the third time is the charm as his women’s volleyball team once again attempts to make reality its dream of qualifying to the Olympic Games. 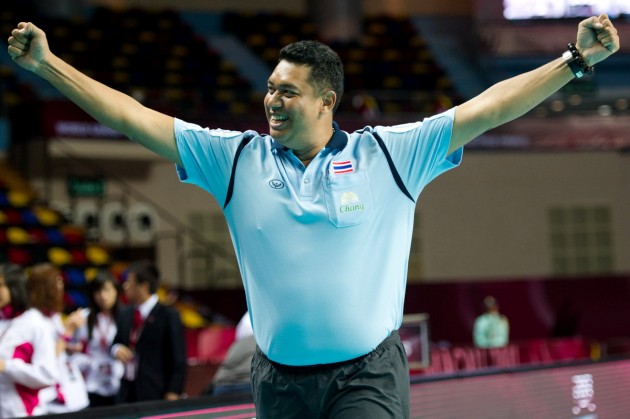 Thailand is one of eight teams taking part in the FIVB World Olympic Qualification Tournament which doubles as the Asian Continental Championships where four tickets the 2012 London Olympic Games are in offer for the top three teams plus the best Asian side.

“The fans back at home are very enthusiastic about our third chance of qualifying to the Olympics so they have big expectations,” Radchatagriengkai said.

“After winning the gold medal at the 2009 Asian Continental Championship in Hanoi with a victory over China, the people in Thailand became very interested about our team,” he added.

Radchatagriengkai gave credit to the directors of the National Association have taken all the necessary measures to improve the team currently ranked No. 12 in the world by FIVB.

“It has been a step-by-step process but we have been reaching our goals,” he said. “Last year at the FIVB World Grand Prix we had our best finish ever with a sixth place.”

Several Thai players have now moved to play in foreign leagues trying to get more used to the international game and acquire experience.

Those are the cases of outside-hitter Wilavan Apinyopang and middle blocker Pleumjit Thinkaow who played for the Fujian Xi Meng Bao club in China, and setter Nootsara Tomkom and defense expert Pannoy Piyanut who both played for the Azerrail Baku in the Azerbaijan Super League.

“We are in the right direction in terms of the improvement of our team,” he said. “And regarding our chances for the London Games I really believe the third time is the charm.”