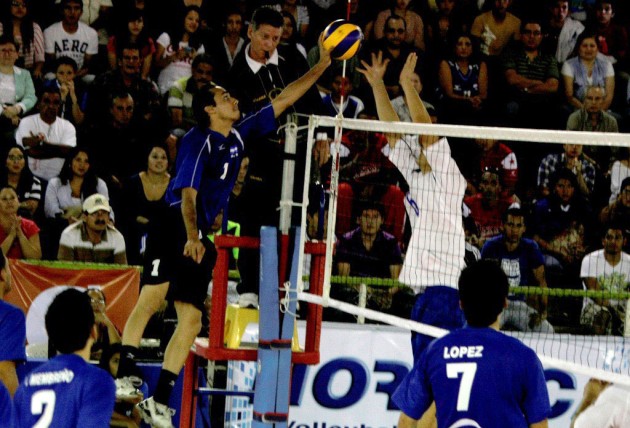 This was the best match so far of the Qualifier showing offensive and blocking skills from the winners who came from behind and virtually became the winners of the tournament. A spectacular recovery from El Salvador in the second set from 4-11 under to tie it at 20 wasn’t enough to seal the deal.

Luis Salgado the best scorer for Honduras with 31 points, Wilfredo Lopez contributed with 14 and Carlos Osorio with 13. Honduras finished with a 16-11 advantage in blocks. For El Salvador, Rodrigo Chavez scored 21 and Carlos Leiva 16.

Still excited and with tears in his eyes, captain Luis Membreño of Honduras said “after losing the first two sets I believed we had it lost, but with God’s will and always keeping our hopes high we knew how to recover”.

“We were defeated because of our lack of attention and determination, even if we came from behind in the first and second sets. I congratulate Honduras for their great coordination” said Leonel Hernandez, captain of El Salvador.

Prof. Rony Martinez of Honduras indicated “I don´t agree with Luis, I never saw the match lost, I had confidence in my team. I knew it wasn´t going to be easy because El Salvador has been doing a serious job in their preparation, but our blocking made the difference”.

Cuban coach Juan Andres Leon for El Salvador congratulated the winners and said “we took advantage in the beginning as Honduras state of mind began to diminish, but in the end they have skilled players and a better physical condition which was why I had to win 3-0 and not extend the match as it happened”.