Thailand kept alive their hopes to qualify for the London Games with a four-set victory over Cuba (25-23, 25-23, 18-25, 25-21) on the final day of action in the FIVB Women's World Olympic Qualifying Tournament at Tokyo Metropolitan Gym on Sunday 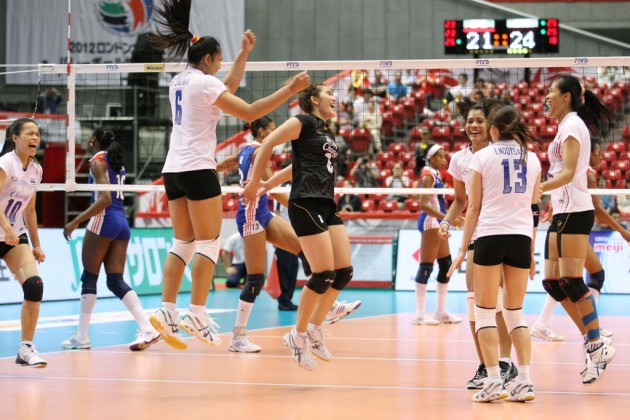 It was a stirring triumph by Thailand (4-3), which grabbed a two-set lead only to see Cuba (2-5) fight back with their strong defense. Thailand displayed a fast attack and accurate spikes, along with great energy in the victory.

Onuma Sittirak tallied a match-high 20 points. Wilavan Apinyapong added 17 points and Pleumjit Thinkaow had 16 in the win. Yoana Palacios notched 16 points for Cuba in defeat. Yanelis Santos had 15 while Ana Cleger and Rosanna Giel finished with 14 and 13 respectively.

A spike by Salas staked Cuba to a 5-2 lead in the opening set. Sittirak‘s spike made it 6-4 for Cuba. A block by Palacios put Cuba up 8-4 at the first TTO. Thailand sent a serve long and Cuba led 10-7. A spike by Thinkaow pulled Thailand within a point at 11-10 and a reception error by Salas made it 11-11. Apinyapong Wilavan‘s dink put the Thais in front 12-11. Thailand knocked a spike into the net and Cuba was back on top at 15-14. Santos sent a spike long and Thailand had a 16-15 lead at the first TTO. Palacios soared for a spike and Thailand was up 18-17. A block by Rosanna Giel moved Cuba ahead 20–19 and Thailand called a timeout. A service ace by Guedpard Pornpun made it it 22-21 for Thailand. Cleger sent a serve long and Thailand had set point at 24-22. Thinkaow‘s spike gave the Thais the set 25-23.

A quick dink by Tomkom Nootsara gave Thailand a 5-3 lead in the second set. Thinkaow‘s spike spotted Thailand to an 8-4 lead at the first TTO. Gyselle Silva‘s spike made it 9-5. A service ace by Santos pulled Cuba within two at 12-10. Santos fired another service ace and Cuba equalized at 12-12. Kanthong‘s spike gave Thailand back the lead at 13-12. Cleger misplayed a pass and Thailand led 15-14. Thailand was on top 16-15 at the second TTO. With Thailand up 18-15, Cuba took a timeout. Another spike by Thinkaow saw Thailand go up 20-11 and she followed it up with a service ace as they drove for the set. Cuba tied it 22-22 on a block by Cleger. Salas sent a serve long and a net infraction gave the Thails set point at 24-22. Cleger‘s spike ended a lengthy rall and made it 24-23. Apinyapong‘s spike gave Thailand the set 25-23.

Cuba had outblocked Thailand 14-1 after three sets. Apinyapong‘s spike gave Thailand a 5-2 lead in the fourth set. Thinkaow‘s spike made it 7-5 for Thailand. Cuba tied it 7-7 on a Salas block. Silva‘s spike put Cuba ahead 8-7 at the first TTO.Santos ended a long rally with a spike and Cuba led 9-8. Sittirak‘s spike put Thailand back ahead 10-9. Thinkaow‘s spike saw Thailand go up 13-12. Thailand had a two-point lead at 15-13 after a block. Thailand led 16-15 at the second TTO after Cuba misplayed a pass. Cleger hit a return wide and Thailand was up 20-17. Apinyapong‘s spike put Thailand within two points of the match at 23-19. Apinyapong completed the victory with a spike for 25-21.