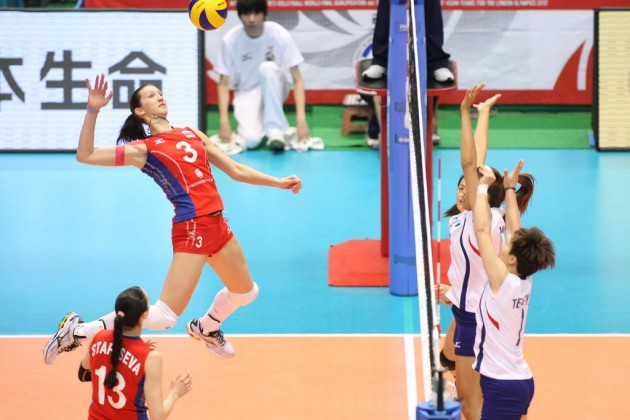 The match pitted the reigning world champions against a side that was winless in the tournament. Russia finished the competion a flawless 7-0, while Chinese Taipei ended 0-7.

Chinese Taipei could not content with the total power package of Russia despite the considerable effort they displayed.

Russia grabbed a 5-3 lead in the first set. Maria Borisenko’s spike put Russia up 7-5. Gamova‘s spike had Russia on top 8-6 at the first TTO. Russia led 10-9 after a reception error by Chinese Taipei. Chen Wan Ting sent a spike long and Russia led 15-12. A perfect dink by Gamova saw Russia in front 16-12 at the second TTO. Teng sent a spike long and Russia‘s lead was 20-12. Lesya Makhno‘s spike made it 23-13 as Russia moved to take the set. Gamova‘s dink gave Russia the set 25-14.

Teng knocked a return into the net as Russia established a 5-4 lead in the third set. A spike by Iuliia Merkulova saw Russia move ahead 7-4 and Chinese Taipei called a timeout. A net infraction put Russia on top 8-4 at the first TTO. Teng sailed a spike long and it was 10-7 for Russia. Gamova‘s two-handed push gave Russia a 15-9 lead and Chinese Taipei took a timeout. Chen‘s spike pulled Chinese Taipei within two at 15-13 and Russia called a timeout. Merkulova‘s spike put Russia up 16-13 at the second TTO. Makhno‘s spike made it 20-16 as Russia methodically moved toward victory. Gamova‘s block took it two 23-17 and Russia captured the match 25-17 when Chen hit a spike into the net.