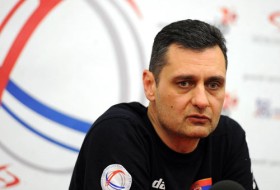 “I congratulate my team because we qualified for the Olympics,” Serbia’s coach Zoran Terzic stated. “I appreciate everything they did, especially in the final set.”

“Everybody was nervous,” Japan’s coach Masayoshi Manabe said. “We knew we had to get two sets. We have to work on our serve reception in the two months leading up to the Olympics.”

“I thank all of our players and I can’t thank the players enough,” Russia’s coach Sergey Ovchinnikov said. “We won almost all of the matches 3-0. We had time for preparation and communication between the players for this tournament.“

“We have reached our goal of making the Olympics,” Korea’s coach Kim Hyung-Sil said. “Thirty six years ago the Korean women took the bronze medal and we will go to London with the goal of getting a medal as well.”

“I’m happy with my players,” Thailand coach Kiattipong Radchatagriengkai stated. “This game will be a good memory for them forever. The match was not easy since Cuba is very strong in all aspects.”