The annual General Assembly of the Eastern European Volleyball Zonal Association (EEVZA) was held on Saturday, May 26, in the capital city of Lithuania with the meeting being attended by CEV President André Meyer accompanied by CEV Vice President Jan Hronek who is responsible for coordinating the activities of the various Zonal Associations established under the CEV umbrella. All EEVZA members were represented in Vilnius by their respective delegates and highest-ranked Volleyball officials. 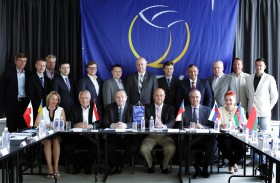 Mr. Meyer opened the meeting by summing up the main activities and projects that the European Volleyball Confederation has been implementing in recent times, devoting his attention also to the FIVB Congress which is scheduled for this coming September 19-21 in Anaheim, California.

While praising the great work delivered in recent times also by the Lithuanian Volleyball Federation that under the guidance of Mr. Marius Vasiliauskas, a former elite Beach Volleyball player, got fully back in action also in the activities promoted by the EEVZA. Mr. Patkin reported about the competitions held last year and the Assembly approved a final version of the regulations governing all Championships slated for 2012, including some specific documents devoted to this year’s EEVZA Beach Volleyball Tour and to the next edition of the EEVZA U18 Beach Volleyball Champs. A financial report for the last 12 months and the budget for 2013 were also presented to all delegates who received and went through the Competitions Regulations and a provisional calendar penciled in for 2013.

Since this was an elective General Assembly, taking into account the excellent work delivered so far, Mr. Patkin was unanimously re-elected EEVZA President for the next two years, being once again supported by Vice Presidents Maris Pekalis (LAT) and Miroslaw Przedpelski (POL) as well as by Secretary General, Mrs. Inara Brokane (LAT).

At the end of the meeting a city tour was organized by the Lithuanian Volleyball Federation to let the participants enjoy the beauty of Lithuania’s capital city whose old town is considered one of the most charming in the Baltic countries.