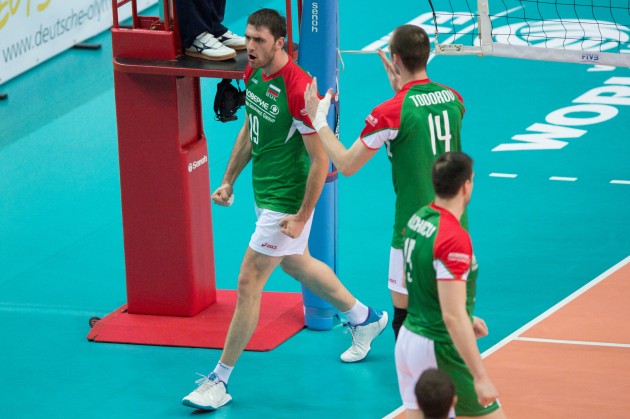 Bulgaria celebrate their win over Germany on Sunday

However, Vital Heynen‘s side stay on top of Pool D despite the loss, just ahead of Argentina.

Tsvetan Sokolov topped the scoresheets with 24 points for Bulgaria while Georg Grozer was the bes scorer for Germany with 22.

Heynen changed his starting seven with Robert Kromm and Björn Andrae coming in as outside hitters.

Germany struggled at the start with Bulgaria highly motivated. Five points in Germany finally found their rhythm with Georg Grozer doing well in attack and Lukas Kampa punishing his opponents with his serve. But Bulgaria held their lead none-the-less with Matey Kaziyski and Tsvetan Sokolov leading the attack to take the set.

Bulgaria started the second set very well with the German team having big problems with Kaziyski’s enormous serves. German coach Heynen took an early timeout but Bulgaria held their nerve, improving on their performance from the last two days.

Germany made a better start in the third with points coming from the block-defence. At eight points ahead Denis Kaliberda pushed Germany further into the lead, before Jochen Schöps won it for the hosts with the second set ball.

Bulgaria re-introduced their starting seven again in the fourth and Germany failed to have a spectacular start. Experienced Marcus Popp helped pull the side back into the match alongside two good blocks from Max Günthör. Bulgaria didn’t give up with float serves from Svetoslav Gotsev causing issues before the visitors sealed the game on their first set ball.