Danielle Selkridge led host US Virgin Islands to a hard fought 3-0 (25-23, 25-20, 25-21) win over Curacao in the second match on the opening day of the 2014 FIVB World Championship Women's Pool C Qualifiers at the Ronald "Ranche" Charles Basketball Arena on Saturday morning. 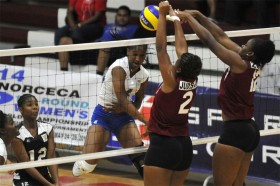 Selkridge ended with ten points while Valissia Brathwaite and Janelle Sarauw added eight points each and captain Sacha Gumbs seven as USVI proved too much for Curacao before a crowd of close to 200 spectators.

US Virgin Islands which had the taller and more athletic players of both teams was surprisingly out-blocked 8-6 while they had the better of the service aces, 4-2.

However, it was by no means a polished performance from both teams as they combined for a total of 64 errors, 30 by the host and 34 from Curacao.

Sacha Gumbs, captain of the winning US Virgin Islands squad while delighted with the win also felt her team did not perform as good as it can.

“At the beginning we started very good but then we fell apart with regards to out service receiving which allowed Curacao back into the set. The second we again started well but we had to fight all the way as Curacao improved their game and in the third set our service game helped us a lot while we also had a much improved showing defensively.“

Lucille Hobson coach of US Virgin Islands added, “We knew going into the match that Curacao would have been a tough contest even they have lost in most of our meetings before and in the end we were made to work hard for the victory”.

“My team did not play well and we know we surely could have given a better performance. We are a very strong passing team but today that was not the case. I don’t know exactly why our passing was not up to our usual good standard but we intend to improve on it. Despite those minor lapses it was a good game for us in that we got a win against a good team and we will see what happens for the rest of the tournament.

Speaking after the match Christian Anthony captain of the Curacao team expressed her disappointment with the display of her team-mates. Anthony said, ” was not happy with the way we played at all because I know we can play much better than we did and we are going too in our next matches“.

Curacao coach, Henry Delfina echoed the views of Anthony and stated, ”We did not play well overall as a team. In the first two sets we managed to stay close with some spirited play but our defence was not as good as it needed to be for this match to get the win. I also believed that our fighting spirited fell apart and it showed in our play as we were not that consistent“.