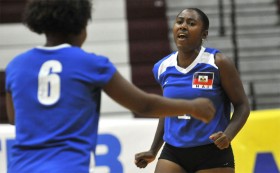 Leading the way for the Haitians who drew the applause from the crowd for their never-say-die attitude to every point played was Sainvilia Aubert and Esther Desrosiers with nine points each.

Astride Jusma chipped in with eight points for the winners who capitalized on the 40 errors of Martinique as compared to its 23 committed.

For Martinique Stephanie Trefle top scored with eight points and was supported by the trio of Tania Villeronce, Sabrina Leopoldie and Melissa Cyrilla with seven points apiece.

An elated Frederic Francois, coach of the winning Haitians said: “It was a good game for us especially as we got the win to start with even though it was basically a new team of players we have. Only our captain has experience at this Norceca level before but the young players stepped up. We had a good first set, but in the second and third sets Martinique played much better which forced us into few adjustments which proved pivotal for us.”

Haiti captain Nadege Louisma said, “It was a very good match for us as the lessons of the coach were used in the match to the best of our ability and we are very satisfied as a team overall as we look to the other matches“.

Commenting on his team’s loss after the match an upbeat Mickael Tramis, coach of Martinique instead credited the Haitians for their work ethic.

Tramis said jokingly, “For me it seemed as though we had six players on the court and Haiti played with 12 because they were scrambling every ball“.

“Congratulations to the Haitians. We have never played a team like them before. We had a poor start and never really recovered, and when we managed to get close to their close we never found the extra push needed to get over that hurdle“.

Martinique captain, Soraya Yazza added: “We have a very new group of players and our play today was just not good enough to adjust and get proper settings. Our lack of attack and spiking along with our digging was not up to par today as well as we got off to a slow start and never really recovered.”