Valissia Brathwaite tallied a joint-tournament high 23 points, laced with 19 kills to lead host US Virgin Islands to a 25-17, 20-25, 25-20, 25-18 triumph over Martinique in the final round-robin match of the 2014 FIVB World Championship Qualification Women's Pool C Tournament at the Ronald "Ranche" Charles" Basketball Arena. 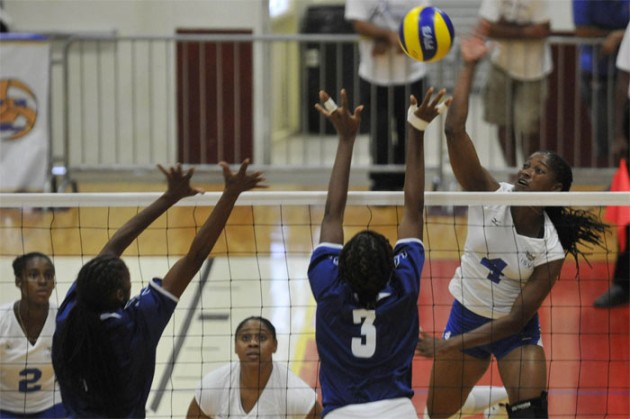 With the win, US Virgin Islands ended with 14 points followed by Curacao (9), Haiti (6) and Martinique with one.

USVI, which also got 12, 11 and ten points respectively from captain Sacha Gumbs, Danielle Selkridge and Elisa Sanchez now faces Curacao in the gold medal match from 8pm on Sunday night while French-speaking Islands, Martinique and Haiti meet for third.

Tania Villeronce led Martinique with 12 points while Laurianne Gwed and Stephanie Trefle each tallied 11 points in the loss.

While they entered the match as favourites, USVI which outscored its opponent 51-33 in spikes was made to work hard for its victory as Martinique showed great fighting spirit even after losing its first two matches. Martinique was narrowly outscored on blocks, 10-12 while on service aces they trailed 7-8.

Despite another win for her team USVI captain Sacha Gumbs was not 100 per cent happy as she felt her team was not clinical enough.

“We made the match much more difficult for ourselves than I think we should but at the same time Martinique made us work harder with their digging.“

Gumbs also dismissed the notion that her team went into the encounter already looking ahead to the final against Curacao.

“We don’t look pass any team. It’s just that our expectations of ourselves are very high and we wanted to try and close out this match in straight sets, which we did not achieve and credit to Martinique for that.“

“We are going back to a second meeting with Curacao and we expect them to come at us but we will be ready, ended Gumbs.“

USVI coach said she still believes her players have not played to their full potential and her team will not be taking Curacao for granted in the final even after winning their round-robin match-up in straight sets.

Commenting after his team’s third loss from as many matches in the tournament, Martinique‘s coach Mickael Tramis said he was not too disappointed as his team continues to show improvement.

“We have improved every match we have played and we are happy as we still have a chance to go to the second round of the tournament.“

“For our players this game was special because they see US Virgin Islands as the top team in the group and the girls were motiviated to do well and now once we take that same attitude and fighting into the third place match with Haiti, I think we have a good chance of winning, stated Tramis.“

Martinique captain Soraya Yazza added, “I was not surprised that we managed to take a set from USVI because we have been improving since the start of the competition. We did not have much practice days back in Martinique and our first two matches kind of prepared us for this encounter.“

WoV DREAM TEAM: Which libero is the...