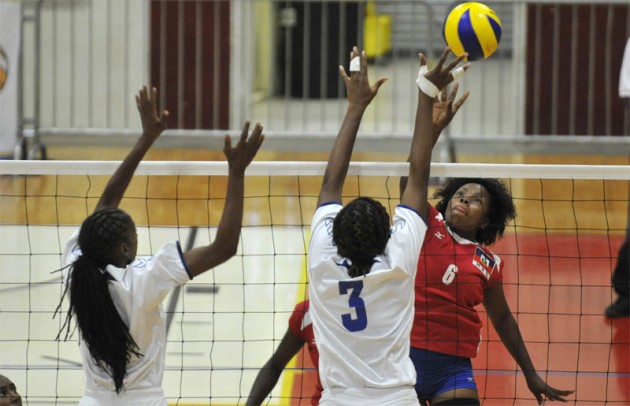 With the win, which came in one hour and 43 minutes, Haiti joined host US Virgin Islands and Curacao as qualifiers from the four-team group for the Second Round of qualifiers later this year. USVI and Curacao met in the final.

In addition to Hilaire and Beaucejour, who sustained an ankle injury earlier in a round-robin match with Curacao, Carline Pierre and Astride Jusma chipped in with eight points each for the jubilant Haitians.

Stephanie Trefle with 16, Laurianne Gwed 12 and Sabrina Leopoldie got ten for Martinique in the loss.

It was the second win of the tournament for Haiti over its fellow French-Speaking rivals after a 25-13, 25-22, 26-24 triumph in the round-robin series.

Haitian coach Frederic Francois speaking after the tense encounter said he was a relieved man.

“For us this match against Martinique was a final as the two teams were fighting for one spot to the next round.“

“It started out well for us but then we were under some pressure as our captain got injured but luckily for us our bench responded very well and was a key to our victory.“

Team captain, Nadege Louisma added: “For me I’m glad the team won but at the same time a bit sad because I got injured and could not play a bigger role in the win. But credit to our other players because they kept up the high level and going forward we know we have to work twice as hard if we want to get further in the tournament.“

A disappointed Mickael Tramis, coach of Martinique first congratulated Haiti on the win as they played a very tough match.

“They (Haiti) kept up their high play and we are happy for them but at the same time we are sad because we had high hopes of being the third team from the group to qualify. But that’s how it is in sports sometimes and maybe the next time it will be us celebrating.“

Tramis also noted that it was tough for him to ask any more of his players having played three matches in two days already with only a roster of nine.

“For us to play with only nine players on our roster against a team like Haiti was always going to be difficult but we fought as hard as we could and gave our best, but it was not good today”, Tramis concluded.

Martinique captain Soraya Yazza also painted a picture of disappointment on her face as he said her team had high ambitions of winning to qualify.

“We really felt we could have come out and get the win against Haiti but tonight we missed something in our game. We committed too many errors and now we have some regrets because we are not going forward.“