Team captain, Christine Anthony had a tournament-high 23 points, inclusive of 21 spikes as Curacao came from a set down to beat an unlucky Haiti, 22-25, 25-19, 25-15, 25-18 in their penultimate match of the 2014 FIVB World Championship Qualification Women's Pool C round-robin Tournament at the Ronald "Ranche" Charles" Basketball Arena. 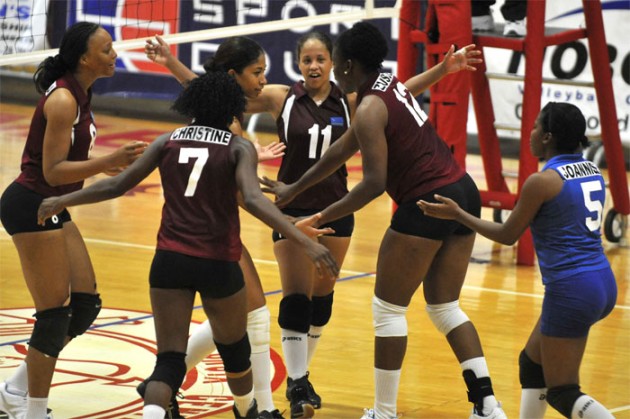 With the win Curacao ended its three-match round-robin pool play with a 2-1 record and nine points while Haiti ended with a 1-2 record and six points in third spot.

Geraldine Gregorius ended with 18 points while Naemi Monte got 16 for Curacao which outblocked its opponents 10-7 and also had the edge on serves, 10-7.

Haiti’s Olmine Beaucejour was her team’s top scorer with 13 points while Nirvah Hilaire and Sainvilia added eight each in the loss.

Speaking after the match a dejected Haitian captain Nadege Louisma first lamented on the loss of her team’s best player which proved vital in the end.

She said, “Olmine Beaucejour is our best player and when she got injured it threw our game off balance after which we could not recover.“

“Even though she came back into the match in the fourth set she did not recover her momentum and as a team we did not respond well and it eventually cost us. However we have one match left against Martinique and with the three teams advancing to the next stage of the tournament we will be going all out to get that third and final spot“, added Louisma.

Haitian coach, Frederic Francois added, “We had a great start to the match and won the first set, but unfortunately we lost our best player to injury and after that our play went a little downhill.“

“But credit to Curacao as well they played a great game and stuck to their plan. We now have a third place match which is crucial if we are to advance and we are going to fight for that spot, ended Francois.“

Curacao captain Christine Anthony said, “After we lost the first set it woke us as we knew we had to step up our play.“

Anthony also praised the Haitian women for their effort which she said helped to make the more interesting and entertaining.

Looking ahead to the final against host US Virgin Islands Anthony said her team will be going all out to claim the gold medal even though they have already secured a top two finish to guarantee a spot in the second round of the World Championship qualifiers.

Henry Delfina, Curacao’s coach first expressed how important for his team to get the win as helped determined which one of the teams would advance to the final alongside host US Virgin Islands.

“Haiti played great defence even after the injury to one of their players but our girls adjusted well by mixing up the attacks with some hard hits and soft hits to confuse their defence.“

With a chance for revenge for a round-robin loss to USVI in the final, Delfina said his players will need to be more consistent and aggressive if they are to take the gold medals.