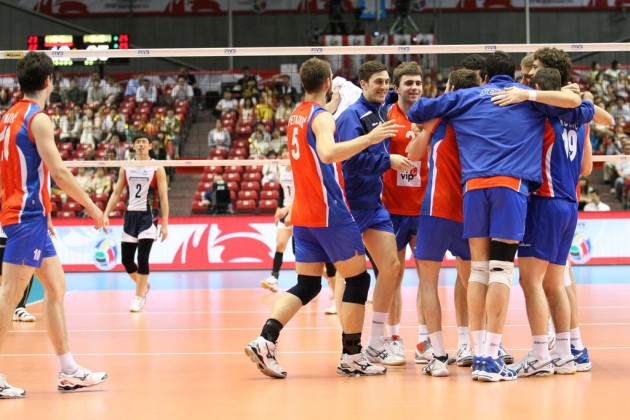 Nikola Kovacevic led Serbia with 15 points, while Kim Hak-Min had 13 for Korea. Serbia outblocked Korea 11-6, but Korea had the edge in serves, 4-2. However, Korea made 34 errors to Serbia’s 23.

There was little to choose between the teams in the first set, but the Koreans could have done better with fewer errors. Shin Yung-Suk, Kim Yo-Han and Jeon Kwang-In provided some good offensive firepower for Korea but it wasn’t enough to hold off world No. 7 Serbia. A sharp hit by Kim did manage to draw the teams level at 22-22, but Nikola Kovacevic took control for Serbia with two decisive spikes either side of a brilliant block on Kim.

Korea stayed close in the second set but were always playing catch-up. Both teams mixed up super spikes with sloppy errors. A great block by Shin on Milos Nikic drew the teams level at 15-15 but that was as close as Korea could get. Two errors by Kim saw Serbia open up a three-point gap at 18-15 and Korea could never get closer than two points after that. Kovacevic brought up setpoint with a crisp shot down the middle and Serbia went 2-0 up when Han Sun-Soo sent a service into the net.

Serbia were winning but they weren’t dominating, and Korea started the third set sharply, combining well, serving well, playing intelligent volleyball and forcing mistakes from their opponents. Lee Sun-Kyu made a good early block on Dragan Stankovic and added two good spikes to put Korea on top. In the second period, Shin got into the groove and helped put his team six points in front at the second technical timeout, a gap that was too great for the jittery Serbs to overcome. The set ended with a whimper when Stankovic sent a serve into the net and Uros Kovacevic pushed a spike wide.

Serbia got their act together at the start of the fourth set while Korea’s hot streak came to an end. Serbia came up with two great blocks on Park Chul-Woo – by Nikola Kovacevic and Nikic – while errors came back to haunt the Koreans. Serbia increased their lead from 10-5 to 15-5 as the Koreans started to wilt. A  spike by Aleksandar Atanasijevic brought up matchpoint at 24-11 and it was all over two points later when Jeon Kwang-In sent a service long.

After two rest days, Serbia return to action against China, while Korea will face Japan.

CL: Last round of Champions League on...

ALB: Studenti and Teuta to battle for...