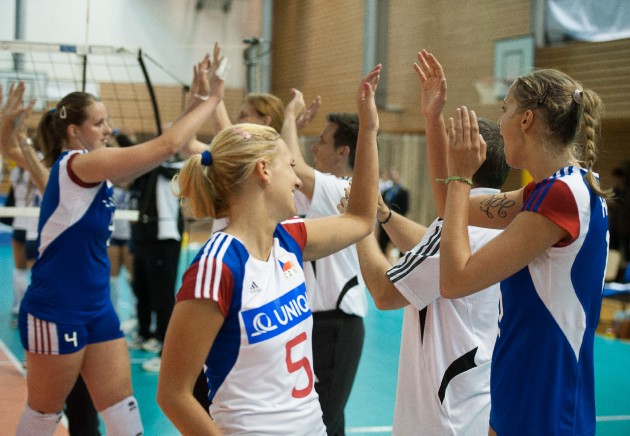 The game started with the score remaining extremely close, with Israel going up by the narrowest margin at the second technical time-out (15:16). Kristyna Pastulova and Ivona Svobodnikova were brought in by Czech coach Carlo Parisi but they could not prevent an unhappy end of the opening set (23-25). Anchored by their captain Helena Havelkova, the Czechs gradually found the right pace (8:6, 13:8) with Andrea Kossanyiova contributing a first set ball at 24:16 to wait for only a few moments to go for the provisional 1:1. That trend continued also in set 3 where the Czech Republic moved quickly up in the score (14:11) helped by many unforced errors committed by the Israelis, thereby sailing to the provisional 2:1. The home ladies then cruised comfortably to the massive 25-7 whereby they finished their job to take maximum points from their first match in the European League.
“We started nervously and our errors resulted in losing the first set. Since the team did not deliver the performance I was hoping for, I decided to go for some substitutions and the quality of our play significantly improved” said Italian-born Parisi at the end of the game. “I am glad that we played our first game with Israel because their many mistakes helped us claim this win” added team captain Helena Havelkova.
“The Czechs did not expect such a good performance from us and they looked a little surprised in the first set. Unfortunately we lost the match and I hope we can take our lessons to improve for the next games” stated Israeli outside hitter Elvira Kolnogorov.

In the second match of the day the Netherlands downed Greece in straight sets (25-15, 25-15, and 25-14) to re-assert their ambition to qualify for the final four of this year’s European League. Setter Laura Dijkema opted regularly for Lonneke Sloetjes who anchored the Dutch offense and eventually finished the match as top scorer with a total of 14 points, evenly distributed across the three sets. The Netherlands controlled the match with ease while Greece did not find a way to stop the quick pace imposed by the “Oranjes” who deservedly won in straight sets.
“I can only praise my players who stayed very concentrated. I do not think that we are the favorites of this group, as the Czech Republic has got a very strong team” stated Dutch head coach Gido Vermeulen. “We cannot play at that level that was displayed by the Netherlands tonight but our intention is to fight for every single point” commented Greece’s captain Nikoletta Koutouxidou.

Stadium Journey – sports stadiums from around the world