Spain needed only 79 minutes of play this afternoon to down Romania in straight sets (25-20, 25-22, and 25-22) in the first match scheduled for Pool A of the 2012 CEV Volleyball European League – Women at “Dudova Suma” sports hall in the city of Subotica. 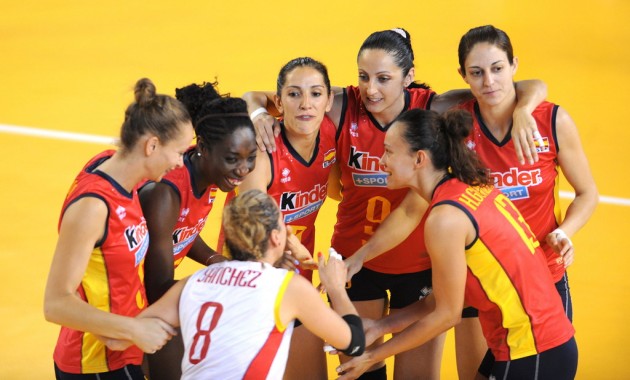 Actually Romania had caught a very good start with Nneka Onyejekwe pressuring Spain’s defense line with her service, but eventually Spain stormed back with team captain Patricia Aranda going for the 17 all after her side had trailed for most of the time. Romania looked very nervous in the final phases of that set and Spain could eventually go for a comfortable 25-20. The second set followed a similar plot with Romania going up at the beginning but Spain flipping the score around already by the second mandatory stop. Setter Patricia Aranda was using most of the time her middle blockers and after going up 20:17, Spain kept control of the operations for the final 25-22. Spain’s good defense was the key to finish the match in straight sets, things going easier after the group had made it to the 20-point mark, before a third match ball sealed the deal.

“This was a good performance especially since we are at the start of the competition and we played an opponent that was not much known, as they have lined up quite many young players. We started slowly but we gradually got into the game and played well when it was mostly needed” said Aranda after the game. “We certainly hoped for a different result but we made too many errors and nevertheless we stay positive and look ahead waiting for the next matches” added Nneka Onyejekwe, Romania’s team captain. Milagros Collar of Spain top scored with 11 points with Helia Gonzalez and Ana Mirtha Correa contributing 10 apiece.