Spain and Slovakia achieved important victories in the first day of competition for the second leg of Pool A in the 2012 CEV Volleyball European League – Men. The Spaniards suffered to beat Denmark in a disputed tie-breaker match (25-18, 2-325, 20-25, 25-14, 15-11) while Slovakia crushed Greece in three sets. 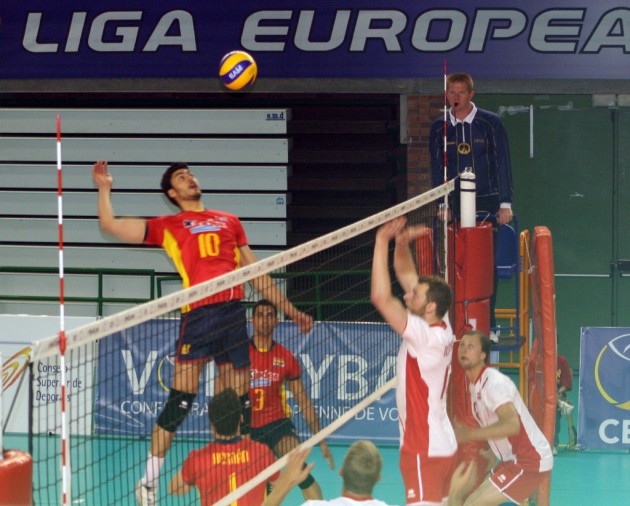 In the first match of the day, Slovakia proved too strong for Greece and won 3:0 (25-18, 25-19, and 25-18). The team trained by Stefan Chrtiansky gave no options to a Greek squad that seemed unable, throughout the match, to stop the effectiveness of its opponents. The distribution by Juraj Zatko provided Slovakia with an edge in the game that Greece could not follow; the Slovaks achieved an early advantage from the beginning of each of the three sets that ultimately would be decisive, as the spikes by Milan Bencz and Milan Hrinak and the successful Slovak blocking system (11 blocks throughout the game) ended in the ball falling regularly on the Greek side of the court. Slovakia was able to maintain that level along the sets, so the squad trained by Stefan Chrtiansky paved its way to an overwhelming three setter victory, a triumph that helps the Slovaks clinch the second position in the pool.

In the second match of the day, Spain and Denmark engaged in a true Volleyball show that finished with a spectacular 3-2 victory for the Spaniards. Spain starred in a first set dominated from beginning to end by a local squad that counted on the support of the cheering crowd present at Los Planos sports hall. However, Denmark experienced an outstanding comeback. The sensational blocking system of the team trained by Fred Sturm completely turned the tables of the match and the Danish squad imposed its predominance in the game. In the following sets, the tie persisted but the visiting squad proved to be a better finisher and was able to close the sets with effective performances in the key part of the periods. An effective reaction of Spain sent the match to the tie-break after a fourth set controlled by the locals. In a spectacular fifth period, the experience of the Spanish squad determined the outcome of the match, and a spike by Sergio Noda put the 15-11 on the scoreboard that meant the final 3-2.

“I have to give credit to my players for their performance today” said Denmark head coach Fred Sturm; “after the first set, my players made a big effort, and they have to be acknowledged for that”. The coach of the Danish squad pointed out that the key for the reaction of its team after the first set was “our defense, which really helped us, as well as our block”.

“The match had to different parts; the first, fourth and fifth set and then the second and third”, said Spanish head coach Fernando Muñoz. “In those three sets that I mentioned first we played at a good level; then in the second and third our attention dropped down and that gave Denmark the chance to go for the match”. As for the fifth set, Muñoz said: “It wasn’t easy; they were playing at a great level but we were very effective, specially the side out, and that gave us the edge to win”.