Serbia – the winner of the past three consecutive editions of the CEV Volleyball European League – debuted on Friday at “Dudova Suma” sports hall in Subotica by edging Hungary in straight sets (25-15, 25-12, and 25-22) thereby providing a splendid Volleyball night to some 2’700 spectators. Right before the start of the game head coach Zoran Terzic was awarded as “Serbia’s best coach” by the local TV station “Ju Eko”. 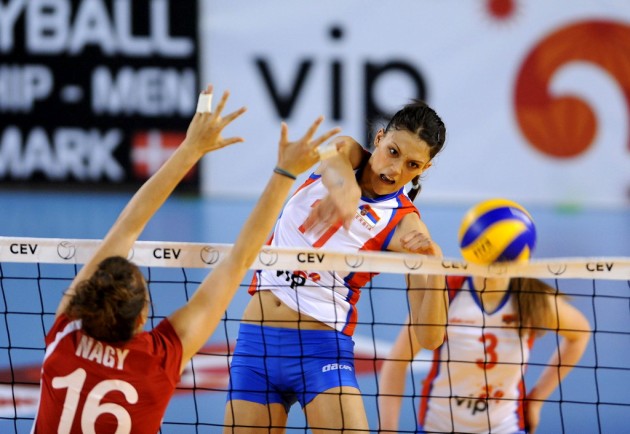 The home side started the game by lining up Starovic, Mihajlovic, Ninkovic and Zivkovic as some of the local stars were rested after the Olympic qualification tournament completed in Japan only this past Sunday, with Serbia going down 1:3 and 2:4 before drawing level at 4. Serbia opened the gap before the second technical time-out, moving up from 10:6 to 15:9 and with a combination of good serving, solid defense and powerful spikes went up 19:9, with Hungary managing to score only a few more points before the local favorites sealed the final 25-15.
The home heroines extended that good momentum also to the opening phases of set 2 (5:1) with Brankica Mihajlovic – who debuted tonight for Serbia’s national team after having previously played for her native country, Bosnia & Herzegovina – already well integrated in the group. As Hungary was evidently struggling in defense, Serbia widened the gap (10:3) and played a solid Volleyball to finish that section of the game in only 20 minutes (25-12).
In set 3 Serbian head coach Zoran Terzic could test out some different options with Ana Bjelica replacing Mihajlovic while Stefana Veljkovic – who played for most of the game – displayed excellent blocks and also contributed to the Serbian tally with her spikes. Serbia controlled the operations with ease and even though Hungary was able to claw back up to -3 (22:19), still the home heroines could complete their mission in only 71 minutes of play.

“I would like to thank this fantastic crowd as their support means a lot to us” said Serbian captain Milena Rasic after the match. “Tonight we were a little tired as we got back from Japan only a few days ago and we need some time to recover and get adjusted to the jet lag. I think that we will play better in the next couple of days” she stressed. “We did not show our full potential tonight and I think we can improve for the next matches” replied her Hungarian counterpart Rita Liliom.
Veljkovic and Bjelica top scored for Serbia with 13 an 9 points respectively while Bernadett Dekany paced Hungary with 9.