Stadium Journey – sports stadiums from around the world

Stadium Journey, publishes reviews of sports stadiums from around the world. So far they have reviewed 959 stadiums. Recently they posted their first review of a FIVB event, Jinshan Beach in Shanghai. 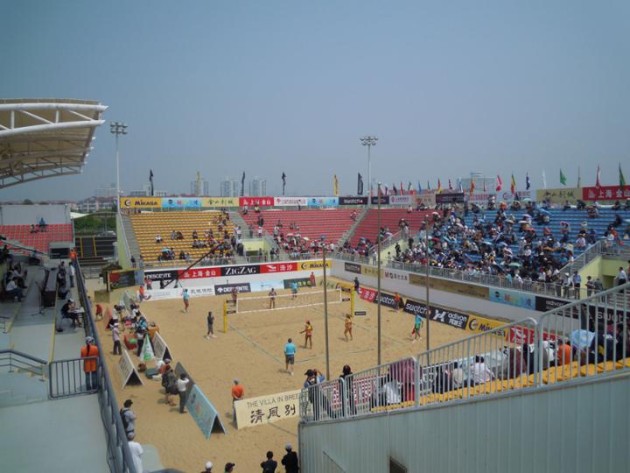 Jinshan Beach Arena is home to the Shanghai Grand Slam, one of 14 stops on the International Volleyball Federation (FIVB) SWATCH Beach Volleyball World Tour and has been for the last nine years.
Located about one and a half hours away from downtown Shanghai, the Jinshan area is popular with the locals who flood the beach and boardwalks at weekends and public holidays.
The centre court of the Arena holds about 3,000 spectators. It is full for both the men’s and women’s finals and there are also five outside courts that host matches up to the semi-finals.

While the Arena itself doesn’t contain any food or beverage outlets, the boardwalk does, and it is just a short stroll from the Arena. In fact food stalls are plentiful and very, very cheap.
There is a wide array of seafood and meats which are usually grilled on a hot plate and are very, very, tasty. Then of course there are noodles, rice and broths to accompany them.
There are a wide range of both soft and alcoholic drinks. Tsing Tao is the local beer and worth opting for over the more familiar international brands.
More importantly the cost is cheap and for a good meal you shouldn’t be spending over a couple of pounds, dollars or Euros for whatever you choose.

With the crowd overwhelmingly Chinese, a lot depends on who is playing to determine the atmosphere at the court. If it is a Chinese side in action then the crowd gets into the match. If there isn’t a Chinese team, then an air of indifference pervades the Arena. Thankfully Chen Xue and Zhang Xi are one of the best women’s teams on the circuit and are on course for an Olympic medal at the very least in 2012. Their win in the women’s final sent the crowd into raptures.
The men’s final by contrast was played between two USA teams, with 2008 Olympic gold medallists Todd Rogers and Phil Dalhausser taking the win. As such, while the free tickets on offer meant the Arena was filled, there wasn’t as lively a crowd as there was for the women’s final, and the fans dispersed long before the medal presentation.
Even so the atmosphere around the outside courts at the start and middle part of the tournament is always good with the players watching other matches and always having time for supporters.

While the tournament markets itself as the Shanghai Grand Slam, Jinshan is about 90 minutes from downtown Shanghai. There are two commercial areas nearby, one a 15 minute walk from Jinshan Arena and another about a 10 minute cab ride away. Both offer shops, restaurant and bars with prices that are not too high.
The beach itself is pretty good with soft sand, though only the brave would take a dip in the water, what with two huge chemical plants north and south of the beach and pumping all manner of materials into the water.
For downtown Shanghai the best way to get there is to take a taxi to Xinchung subway station and jump on Line One which takes you to People’s Square at the heart of the city. From there all the sites of the city are reachable either by foot or subway.

Like most of the events on the FIVB World Tour tickets are handed out for free, so the crowd is not exactly the most passionate there is. Furthermore if neither of the teams is Chinese, then they quickly lose interest.
The fact that getting into China as a tourist is somewhat bureaucratic to say the least means that any fan who wants to follow the tour are more likely to go for the more accessible European tournaments that take place in June, July and August.

The issue of needing and paying for a visa just to get into China means that anyone considering going to the tournament has bureaucratic issues to deal with long before arrival. Add in the cost of flying there and then getting from the airport to Jinshan adds further layers of difficulty.
Furthermore, the only accommodation is of the upper end variety, with international four star hotels the only ones in the area. Downtown Shanghai though does have a wide variety of hotels, though that adds in the cost and time of transport.

While the action on the court is good, just getting there means that anyone from outside China that wants to take in the Shanghai Grand Slam has to pay out a fair amount up front on flight, transport, visa and accommodation.
That said, for someone who is a beach volleyball fan and based in China or elsewhere in Asia, it is worth taking a look at the tournament and what China’s largest city has to offer. Plus once there, costs of food and drink, transport and entertainment are low.

The Jinshan Beach Arena is one of three stops in China on the FIVB World Tour and is sandwiched between the Sanya Olympic Bay Open for women and the Beijing Grand Slam at the 2008 Olympic Games venue. As such, if anyone is planning to visit one tournament, it would make sense to take in all three; involving three different areas of the country and two major cities.
The Shanghai tournament has only just recently been upgraded to Grand Slam status from the more junior Open, so improvements on entertainment and activities at the tournament should improve in future years.

PHOTO OF THE DAY: Head coach of...

What happens when you are not prepared...