Spain and Denmark finished with victories the second day of competition in Pool A of the 2012 CEV Volleyball European League – Men after two disputed matches played in Teruel. 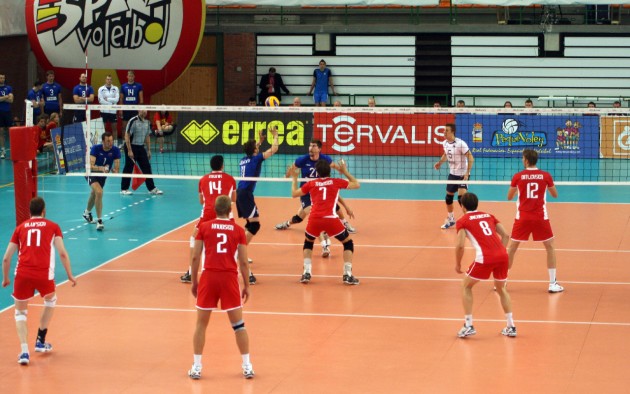 In the first match of the day, Denmark beat Slovakia 3:2 (19-25, 25-20, 22-25, 25-19, 15-13) in a spectacular Volleyball showdown between two teams in top form fighting for a key victory in the race for the final four. The tie persisted throughout the match, and only minimum differences at the end of the sets tipped the balance in each one of the five periods of the game.

The attacks by Mads Ditlevsen (32 points in the match) in the Danish squad were immediately responded by the offensive actions by Milan Bencz (29 points) on the Slovak side. With the two main attackers from each squad at their best and with extreme equality marking the evolution of each set, the game did not have another possible outcome than the tie-break. Any of the teams could have achieved the victory but the inspiration in the final moments of that period was rather on Danish hands. A spike by the ever present Ditlevsen put the final 15-13 and took Denmark to sign its first triumph in the 2012 European League.

Danish captain Kristian Knudsen in his words was full of praise for teammate Mads Ditlevsen: “He probably played his best match ever for the national team, so we were somehow obliged to win. Of course the team helped, but it is Mads we have to thank for this win. It is a lot more fun to win today in the fifth set compared to yesterday’s defeat against Spain. We are very proud of this result”.

In the second match of the day, Spain beat Greece 3:1 (27-29, 25-19, 25-15, 25-22) in a game in which the locals had to overcome a good first set by their rivals and had to play at their maximum to achieve their fifth victory in a row in the tournament. Greece took Spain by surprise when, after witnessing how the locals controlled the onset of the first set, the Hellenic squad upset their rivals by clinching the first period (27-29). The Spaniards were forced to come from behind and attained the triumph in the second set thanks to the effective distribution by setter Guillermo Hernan, who provided valuable attacking options to his teammates and lead the locals to the final 25-19. From that moment on, Spain dominated the match and the attacks by Iban Pérez and Gustavo Delgado, as well as the participation of middle blocker Jose Miguel Sugrañes, allowed the local heroes to control the following sets. The 25-15 and 25-22 that followed put the final 3:1 on the scoreboard and gave Spain a new victory in the competition.