President Leonel Fernandez Reyna presented the national flag to the Dominican Republic’s women team that will be defending the national colors at the 2012 FIVB World Grand Prix set to begin on June 8 in four cities around the globe. 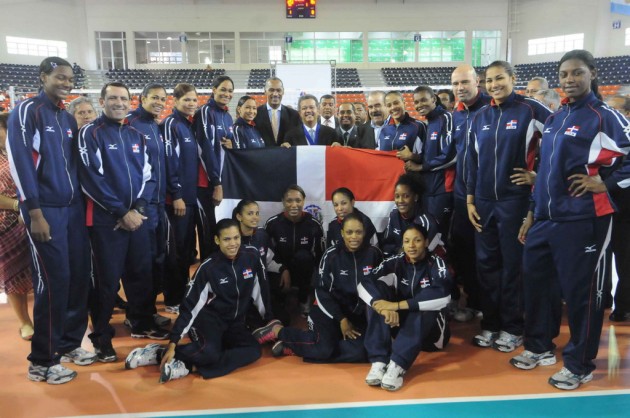 The Dominican President greeted each one of the member of the team before the ribbon cutting ceremony to officially re-open the venue which was first inaugurated for the 2003 Pan American Games held in Santo Domingo.

FIVB Hero Milagros Cabral, on behalf of all her Dominican teammates and members of the technical staff, handed Dr. Fernández  Reyna one gold medal similar to the ones they accepted when the  Dominican side booked their ticket to the Olympic Games at the NORCECA Women’s Qualification Tournament last month in Tijuana, Mexico.

Taking place a couple of weeks before the London 2012 Olympic Games, the 20th edition of the FIVB Volleyball World Grand Prix Finals promises to be one of the most exciting.

Dominican Republic and USA, two teams already qualified to the London Olympic Games, will compete along with Germany and Chinese Taipei in the first of three consecutive weekends of the preliminary round.

The Finals will take place in Ningbo, China with the best five teams joining hosts China from June 27 to July 1.

Two other teams of NORCECA, Cuba and Puerto Rico, are part of the 16-team field contending in the FIVB premier women’s annual event.

FIVB M: India ready to do the miracle in the World Olympic Qualifications in Germany