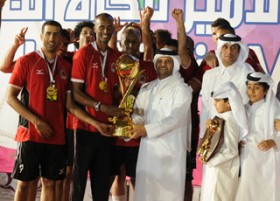 HE Sheikh Saoud bin Abdulrahman Al-Thani congratulated Al-Rayyan team on winning the prestigious tournament and lauded the performance of Al-Arabi players during the match.

Al-Arabi and Al-Rayyan qualified to the final match after beating Al-Ahli and Al-Jaish respectively at the indoor hall of Al-Arabi SC on Thursday.