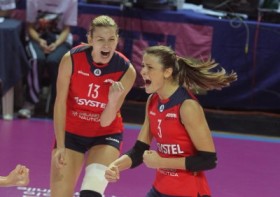 Katarina Barun on the left, Bechis on the right

In the season 2010/11, the first of two consecutive seasons in Novara, Katarina got a serious left knee injury during the first round of the quarterfinals with Pesaro. After the injury, that affected the whole season, Barun returned to the court and Gianni Caprara gave her the role of the opposite player, her natural position.

Her career began in the Italian top division in 2006/07 when Bergamo won the Champions League, which was the most important success in her career. During the following season, she played for Chieri.

In 2008/09 she also took part in the Champions League playing for Metal Galati Romania. In Romania, they won Romanian Cup and the National Title.

During her last season in Italian league, she scored 1042 points (52 aces).