It was quite a reshuffle, the last Dutch home match of the 2012 CEV Volleyball European League in Almere. The Netherlands managed to even the score in sets twice, but had to accept the loss of their match with the Czech Republic in the fifth act (20-25, 25-20, 20-25, 25-18, 12-15). The Czechs remain Pool leaders with this result, while the Dutch side remains the runner-up of group C. 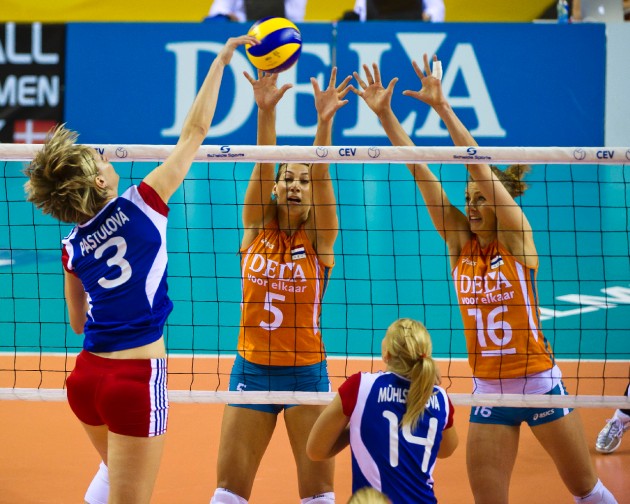 Just like on Saturday the Dutch had a slow start. After an ace of Lucie Muhlsteinova, the Czech Republic reached the first technical time-out with a 2-point lead. Despite the powerful hits of Lonneke Slöetjes and Caroline Wensink, the “Orange” side could not keep up with the Czechs. Via 18:21 the guests cashed the opening set with the score of 20-25.

In the second act, the Netherlands rushed to a 9:3 lead, but then the Czech Republic managed to score four points in a row. By the hand of Dutch team captain Debby Stam-Pilon and veteran Caroline Wensink, the Netherlands widened the margin again (14:11, 20:15). Substitute Angelique Vergeer, who replaced Maret Grothues, ended the second set.

A reshuffle followed in the third set again where the Czechs immediately took the lead, building it out carefully. The Czech Republic was brilliant in defence and despite the switches of players Vermeulen tried, he could not prevent the Czechs to lead in sets again.

The home team appeared nervous at the start of the fourth set, but managed to take the lead with some hard work (4:2). The team of Vermeulen enlarged the pressure with aggressive and fast play, which sorted the wanted effect (18:13). The Pool leader approached again (20:18), but the Netherlands kept cool. An ace of team captain Stam-Pilon and three points in a row of Dutch top scorer Slöetjes were the closure of the set.

The final was a treat for the audience in Almere. The team of head coach Carlo Parisi took a modest lead (3:5), but a powerful hit of Grothues levelled the score again. Opposite Aneta Havlickova then made the difference for her team. The Czech number four scored every ball she hit, frustrating the Dutch block. And when Slöetjes attempt was stopped by the Czech block, the difference stood at four points (8-12), with the squad of Parisi finishing the job professionally.

“Despite our loss today, we played quite well. The Czech Republic simply has a good team with two spikers that can make the difference on crucial moments”, stated the Dutch coach after the match.