More than five years ago the efficient opposite Georg Grozer had no dreams to play in the Olympic Games with his ex Hungarian nationality, but when he gained German nationality in 2006 he started to think of that dream which edges closer to reality after the amazing victory for his new country Germany over Cuba on the second day of the World Olympic Qualification tournament at Berlin. It is an additional success for the Hungarian-born 27-year-old opposite spiker in this golden season for him. 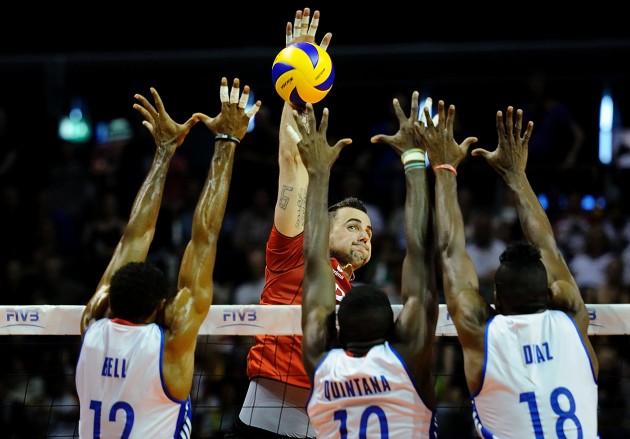 In Cuba’s games, considered as the main decider for the Olympic ticket in Berlin, Grozer was the most outstanding player in the tournament as whole scoring impressive 35 points from 25 successful attacks, 6 serve aces and 4 blocks. Simply he was the magic of the tough five set match and enough that he scores the decisive point of the tiebreak.

“I’m happy with my team’s performance and passion they played against the strong Cuban team,” Grozer said after the 126-minute Marathon

“It is really a big dream to play in London among the best players of different sports all over the world. This is what I was thinking of since I’ve got the German passport after neutralization and I fell pound with my colleagues now,”

This season Grozer achieved Poland league championship with his club Rzeszow after three decades of absence at the top of the podium to cut the series of Belchatow dominance in the last years. He added a rare personal achievement when he was elected player of the year in Poland. It was the first time that a foreign player gained this title. He will shift this season to Belogorie in the Russian league.

Four years ago, Grozer was waiting for his German passport during the 2008 World Olympic qualification tournament in Düsseldorf. He was sitting in the tribune watching the decider match between Germany and Cuba when the former rebounded from two sets behind to win the tiebreaker 3-2.

“I was really interesting to follow up that match and I didn’t realize that this scene will be repeated 4 years later with almost the same kind of excitement. This time I was in the court with my team feeling the victory more than being in the tribune,”

Germany coach Vital Heynen has got a problem that is nice to have when it comes to the opposite position. Jochen Schöps as well as Georg Grozer are two options for the team in this critical position, who can resolve a match almost on their own.

Finally he chooses Grozer for this job being a world class volleyball player having impressive services and blocks. The 2.00 m tall player resembles his father, who created glories in the 80’s and 90’s, in appearance, game and motion.

In 2011 Grozer could not help the German team because of an injury but in 2012 the dynamic and powerful hitter wants to do his best in the World League beside the success in the Olympic Qualifier. His fastest service is 128 km/h.