Scotland Volleyball Chief Executive Margaret Ann Fleming who is also the President of the CEV Small Countries Division and a CEV BOA member urged British sports fans not to miss out on a fabulous opportunity this week and next – watching the Great Britain Olympic men and women play in Scotland just weeks before London 2012! 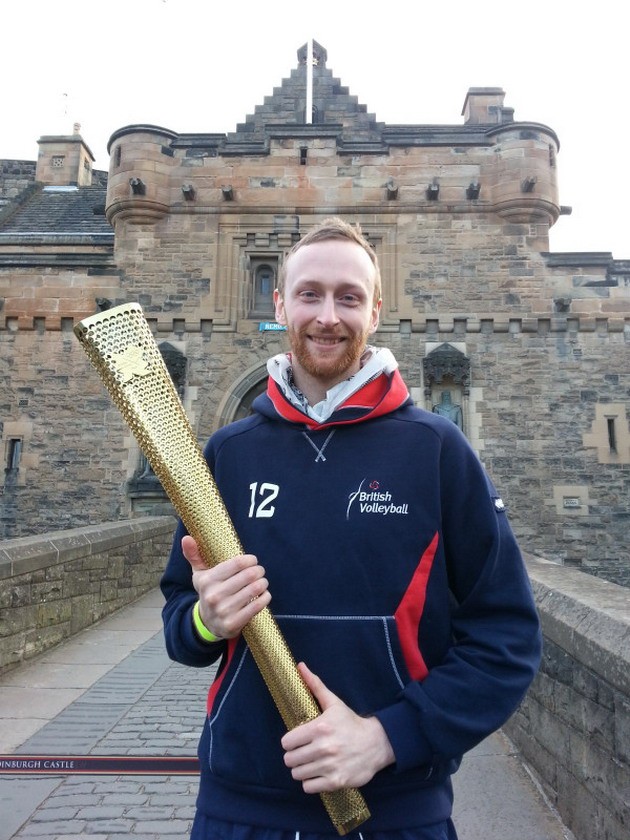 The GB men’s team face Belgium in a three-match series at Edinburgh University’s Pleasance Sports Complex in a week that sees the Olympic torch relay hit the streets of Edinburgh. Chris Lamont (featured in the attached picture) from Glasgow is standing outside Edinburgh Castle with his Olympic dreams held within the Olympic torch minutes before the Olympic flame lit up the capital of Scotland.

Margaret Ann Fleming said: “This is a wonderful opportunity for the Volleyball family of Scotland to really get behind and support all the British athletes and especially those who they have known for many years and who originated from Scottish clubs. Olympic tickets are like gold dust so to have the chance to see both GB teams perform at their best just days before London 2012 is fantastic. The support from British and European Volleyball has also been wonderful and as the excitement grows for our GB players these next two weeks and matches in Edinburgh and Glasgow is just the icing on the cake for the Scottish fans”.

The GB women’s team is set to play against Algeria next weekend, June 22-23, 2012 in Glasgow, Kelvinhall Sports Arena. These shall be intriguing matches as both these teams have been drawn in the same Olympic Pool A for the games in August –  an early tussle before the Olympic stage itself!

ITA M: Carpi is still a candidate for the seria A